Emmanuel Wanjala has filed a notice of appeal against a court ruling which paved way for the re-appointment of corrupt Pavel Oimeke as director-general of EPRA.

In his petition, seen by cnyakundi.com, Emmanuel Wanjala states that he was dissatisfied with Justice Hellen Wasilwa’s decision to dismiss his earlier application against the official for lack of merit.

In August, Pavel Oimeke, who has been in office since 2017, was eligible for a second term but Emmanuel Wanjala rushed to court, arguing that the renewal should not be automatic but it should be subject to competitive and procedural requirements.

Justice Hellen Wasilwa on August 12 temporarily stopped the EPRA board and the Energy and that of Petroleum and Mining Cabinet secretaries from deliberating the renewal of Mr Oimeke’s tenure, which ended on August 1.

However, in her last months ruling, Justice Wasilwa threw the petitioner under the bus when she said the petition had been overtaken by events since EPRA board had already renewed the director-general’s term for three years. She noted that Mr Oimeke applied to be reappointed as CEO in January. The application was considered in March and accepted in May, three months to the expiry of Mr Oimeke’s term.

“In the circumstances, I found that the application did not have merit and therefore I dismissed it and ordered that the status quo of the first respondent be reinstated immediately as the DG. I had stayed that position because I thought that he had not been appointed, but he has been appointed and rightly so. And therefore he is rein,” Justice Wasilwa ruled.

Justice Wasilwa also dismissed a prayer for the court to compel Ethics and Anti-Corruption Commission to investigate alleged claims of loss of funds, saying the anti-graft agency is an independent body, which cannot be compelled to act. 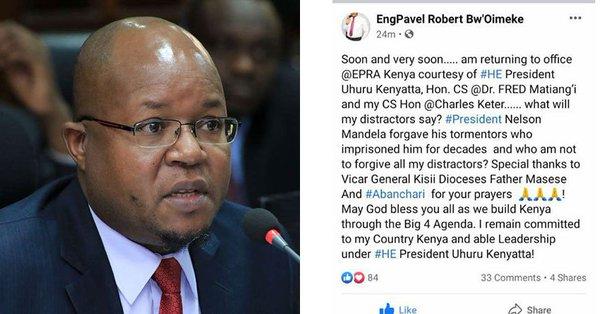 Bragging of ties to the system

Last week, we managed to nab Pavel Oimeke boasting on Facebook how he has ties with State House and Interior Cabinet Secretary Fred Matiang’i.‘Soon and very soon am returning to office @EPRA Kenya courtesy of #HE President Uhuru Kenyans, Hon. CS @Dr. FRED Matiangl and my CS Hon @Charles Keter what will my distractors say?’, he wrote on Facebook.

Though the post has since been deleted, netizens had already screenshotted it and shared it with our investigative team that is following the case closely.

Oimeke who has been at the helm of the energy regulator for 3 years has been mentioned in countless corruption and mismanagement scandals.

Mr Oimeke’s tenure has been marked by corruption, nepotism, favouritism and lacklustre leadership in executing the mandate of EPRA.

Pavel Oimeke, the corrupt EPRA Boss that had been suspended EPRA MD

Pavel Oimeke is alleged to receive bribed to license illegal LPG filling plants. He then engages in PR stunts and side-shows aimed at misleading Kenyans. He was supposed to be arrested during the #SwitchOffKPLC campaign but it is said he managed to bribed detectives to walk a free man, despite being a criminal linked to the rot in the energy sector. The #SwitchOffKPLC campaign has exposed the rot in the energy sector and particularly EPRA.

“The rot at ERC is appalling and most employees are staying there to just earn a salary. The man has turned the Commission upside down in less than two years since his appointment”, wrote a staff of EPRA, then Energy Regulatory Commission (ERC). The anonymous source further said, ‘Out of 10 employees, 8 of them are from his village. They have zero skills and tribalism reigns supreme’.

DPP needs to move in to unearth the irregular award of tenders at ERC. He terminates procurement contracts anyhow without valid reasons if you’re not cooperating. Also, substandard goods are accepted upon his coercion of employees to sign for them. It is believed that these companies are either his/his operatives.

In Oimeke’s time, he has engaged in useless regulation of fuel/gas prices which does not make sense or serve the purpose to alleviate the suffering of Kenyans.

He has overseen Energy Injustice which has left the sector more corrupt than when EPRA did not exist. This has led to some quarters calling for the disbandment of the Commission. Oimeke also opened a lot of lawsuits against the commission due to his ‘eating ways’