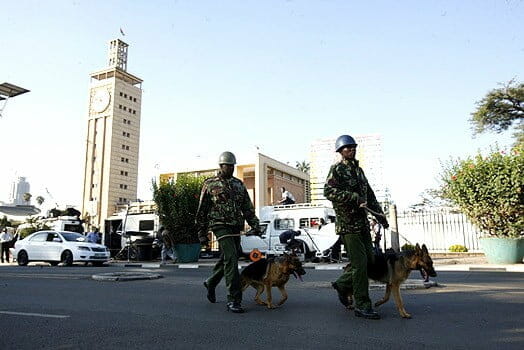 Immediately roads leading to parliament were blocked, Kenyans started questioning the motive behind the tight security. This usually happens when there is state of the nation address or a head of state from another country is passing. Notably, the nation media group online Blogs joined the bandwagon to convince Kenyans  that ” The roads were closed in new security measures . Probably to kill the rumors that Kenya is hosting Nkurunziza …

This happened so fast. There is something fishy . In fact there is word that Kenya is hosting Nkurunziza after he failed to go back to his country after a coup. Kenyans on social media started asking why Kenya is hosting this impunity lord with rumors surfacing that he was around parliament hence the security measurers.

Officers have erected barriers at the junction of Harambee Avenue and Tumbo Avenue, near the Treasury.

Movement of vehicles on Parliament Road has also been restricted at the City Hall road and Harambee Avenue junctions.

After all Kenyans want to Know what is going on and soon we will know the truth. According to security officials, the roads leading to parliament have been closed due to security concerns, an argument many analysts have rubbished. Is the  fella in Kenya ?