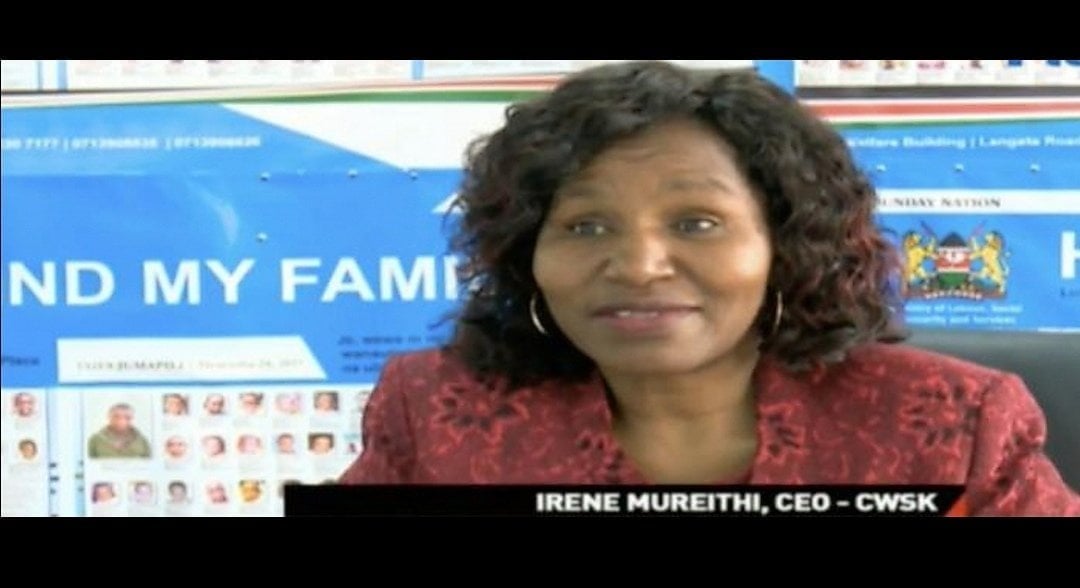 This is a story of money laundering, looting of a state corporation and gagging of a media house from revealing the hard truths about the tenure of one Irene Mureithi who now christen Rogue. She has earned the title and henceforth Rogue Irene Mureithi must be aware.

First and foremost, whatever has already been revealed in the first two posts were just summaries of her looting sprees.

In this next chapter, we document deeply what was happening. Documented evidence of malpractice at the Children Welfare Society of Kenya (CWSK).

Director of Public Prosecutions (DPP) Noordin Haji knows these issues but has he/will he act?

It would be prudent to start by Acknowledging the Leadership of the Office of Director of Public Prosecution on the war against corruption and embezzlement of funds from the government institutions.

The main concerns are based on the following agendas.

It is our humble submission that you may go through this document keenly and intervene by engaging other stakeholders in solving the problems without compromising our situation (Life). It is worth noting that you have been mandated by the president to help him leave a legacy behind.

We have been given the opportunity by the government to construct foster care Centers for the Orphans and Vulnerable Children (OVCs) to help in the service delivery. In all our construction sites, it’s worth noting we have always engaged our contractors on labour based services. The CEO has however, hatched a scheme, to use this labour contracts to defraud the organization, as will be shown below. This has been done through creation of companies, where the directors are just puppets. The second face is through soliciting for powers of attorney, to allow proxies to co-open (with the directors) and operate bank accounts. In most cases the proxies are unsuspecting employees of CWSK, who are lured on the pretex of checks and balances of the contractors’ accounts. It is worth noting that the accounts are domiciled (either opened at or transferred to) in Equity Bank, Kilimani Supreme Branch, the same branch where, all the major CWSK bank accounts are domiciled, despite the fact that the project sites are in Isiolo, Nanyuki, Joska and Bungoma. Withdrawals are made in lump sums from these accounts, at Equity Bank Supreme Branch, and handed to CWSK finance officer, who handles the monies henceforth. These (lump sum withdrawal and account domicile) also raises an audit query on the side of the bank as to the timing, of deposits and withdrawals, amount and the potential source and use of those monies. Is it possible that some employees of Equity Kilimani Supreme branch are compromised, and what benefit do they derive from such engagement? The said companies are discussed as below:

We are going to analyze each project and try to give the details on how funds have been embezzled and it effects to the projects.

Hassan Wario is a politician from Isiolo County. He was awarded the contract in 2014 on a labour based cost mode.

His contract was to cover:

The Company was incorporated back in 2010.The directors of the company is Hassan Wario Yarrow. The C.E.O (Irene Mureithi) entered into a gentleman’s  agreement with the owner of the business entity to allow her operate their bank accounts together with her unsuspecting employees who were made to believe that they were for oversight purposes. These staffs were used and did not benefit financially by acting as joint signatories to the account. This accounts has been run by C.W.S.K at the Head office .Their cheque books are always stored in the Finance office. The company has been running three different bank accounts at Equity Kilimani but as at now, we only have to bank accounts that we can access i.e. Account No 🙁 1470264351484 and 1470271086059)

You will notice that Child welfare society of Kenya would make payment to the contractor under the instruction of the C.E.O. Once the payment is done, Mr. Maina will write the cheque from Aburo accounts and signed by the cwsk employees then latter take the two cheques to the banks. Remember the 1st cheque is for depositing funds to the aburo Accounts and the other cheque is for withdrawing money from the contractors accounts.

To your Surprise, the account signatories have been Employees of CWSK. The ironical part is the employees when they are introduced, they would be lured that their work is to help the organization not to lose funds. Some of the staffs who have been Signatories of the Aburo General contractors:

The staff by the Name Brooke Abuya withdrew from being the signatory after noting some fraudulent activities in the bank and since that time he has always been frustrated in his line of duty. He has been transferred from Head office as the head of Adoption to Eldoret branch under unclear circumstances in May 2019. Some of these frustrations forcing people to rather keep quiet.

Without reporting to work .He is still a signatory in the said account. The C.E.O however can’t sack him because of the information he holds.

We would also like to bring to your attention that in all the construction sites, Child welfare society of Kenya have been buying materials. From this point, it would be important to analyze and compare the material cost and labour cost in order to prove our point of Fraud. It would be hard to give actual valuation cost per project due lack of expertise in valuation. The figures we have been using as the revised project cost are way inflated hence may not bring out the true picture.

Summary of the Project Cost under Aburo General Contractors

The information relates to the allocation from the government and what has been spent in one FY 2018/19.

That brings in the question of what kind of construction would consume such amount of money.

N.B. The figures are projected to grow before the end of the financial year.

Since the start of  the project

Question to ask to prove the point of Embezzlement

N.B. If you provide a court order to the Equity bank for the Accounts detail, you will be provided with the static date of all the signatories of the said accounts since the accounts were opened.

The business is owned by a woman named SADIA OSMAN.

Her contract was to cover:

The account has been run by the CWSK head office .Their cheque books are always stored within our office. The company has been running bank accounts at Equity Kilimani Account No: (1470264208359)

In this account, the person operating this account is a bit different from Aburo General Contractors. It is operated by a Lawyer who acts as a signatory by the name Paul Mwangi Ndungu ID No O237886.

To create the relationship, Paul Mwangi Ndungu started giving CWSK legal services back in year 2013 when he was the legal officer who dealt with the transfer of land and being the custodian. It is after the interaction with the organization that made him become one of the signatories of the fore said bank Account.

Evidence showing their relationship is as attached below.

I wish to analyze the transactions that have taken place last financial year FY 2018/19 to bring the sense home.

Since the project started:

This means that the total funds that has been embezzled using this account amounts to Kshs. 137,103,240

N.B- The figures are subject to change cause payments are made on weekly basis or as it may be required by the C.E.O –Irene Mureithi.

The owner of this company is not yet known to date. The company was awarded a contract to manage the Bungoma construction. From the attached image of the cheque annex 3.The account was opened in a different Equity Bank A/C No-1290270574339 then later transferred to Equity Bank Kilimani branch.

Apparently he also withdrew after realizing the fraudulent activities and that the C.E.O (Irene Mureithi) was taking advantage of him. The C.E.O is in the process of getting a new signatory.

N.B. Since the withdrawal of Harun Mburu, another person has been incorporated and we presume that it’s a staff whom we don’t want to mention due to lack of facts.

Their contract was to cover:

This company is being operated as a proxy. Its major transactions are operated at Equity Kilimani Supreme Branch. The operations of the account are done by Irene Mureithi and the her Elder brother. For the confirmation, a court order to direct the bank give full account holders and its signatories would clear out the reality.

Full Exposé: The Rot And Fraud At The Child Welfare Society Of Kenya

NEXT Post: Exposing Cheki, the car dealership and other money laundering companies