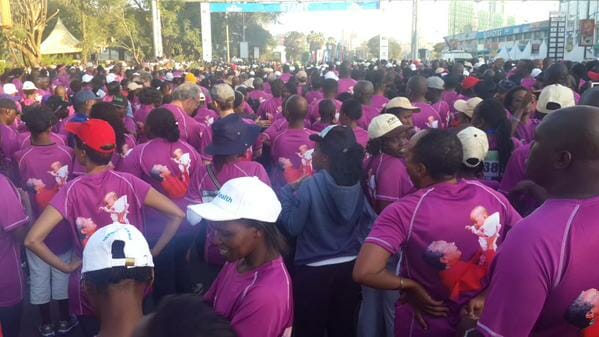 The situation in our hospitals is wanting. That is as fact and nobody should be blamed for that. Many plans to save the health sector in Kenya have  flopped. The truth is that Problems stem from mismanagement rather than a lack of resources. There are huge resources allocated to the health sector with a popular study that 70 per cent of funding is allocated to staff salaries leaving few resources for service delivery.

Ministry of health gave a 3 Million to Margaret Kenyatta to support her Beyond Zero Campaign. It is very sad that no media has questioned this because they are busy spamming us with pictures of the private developers, land grabbers, Impunity Lords and the Media poseurs running ” To save Lives ” or to eradicate what they have partly contributed towards.

By donating 3 Million, It means that the ministry has failed. If the ministry was determined, Margaret would not be running to raise cash to stop maternal deaths- She would be running for fun( Assuming she is not doing all these for PR ) . It was a shame to see Health Cabinet Secretary Mr Macharia in the beyond Zero Campaign trying to eradicate what his ministry has been promoting since the first early man hit another with a bone. What a shame !

The ministry of health gets approximately 47,362,261,263 but of all these funds…There is no amount allocated for Charity . So I feel it was a mistake for them to give a 3 Million  instead of using it elsewhere for something like provision of clean water or buying of beds since many hospital lack the very basic facilities . It seems Macharia has failed in delivering. It is time he gives the first lady that docket because she may deliver.