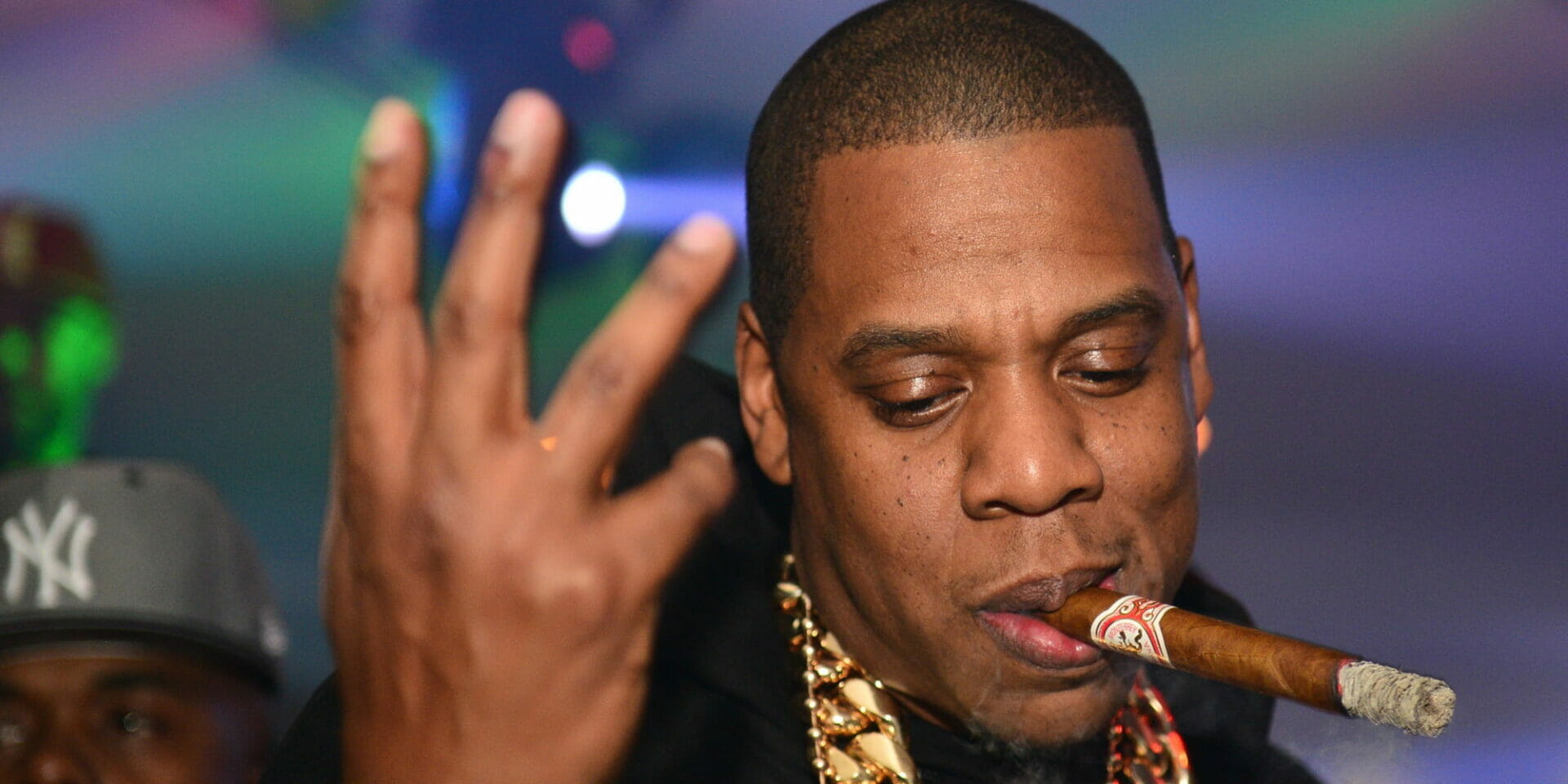 Caption: Jay Z, the legend! You smoke blunts, while I smoke Cubans all day. Class, style and sophistication personified.

He is the legend, not her. Beyonce unmasked Jay Z’s personal life yet the man has gone out of his way to lay low and discreet as regards to his family. This is what happens when you marry self-seeking entitled bitches, whose only purpose in life is to wreck havoc and inflict misery on the men who do so much for them. 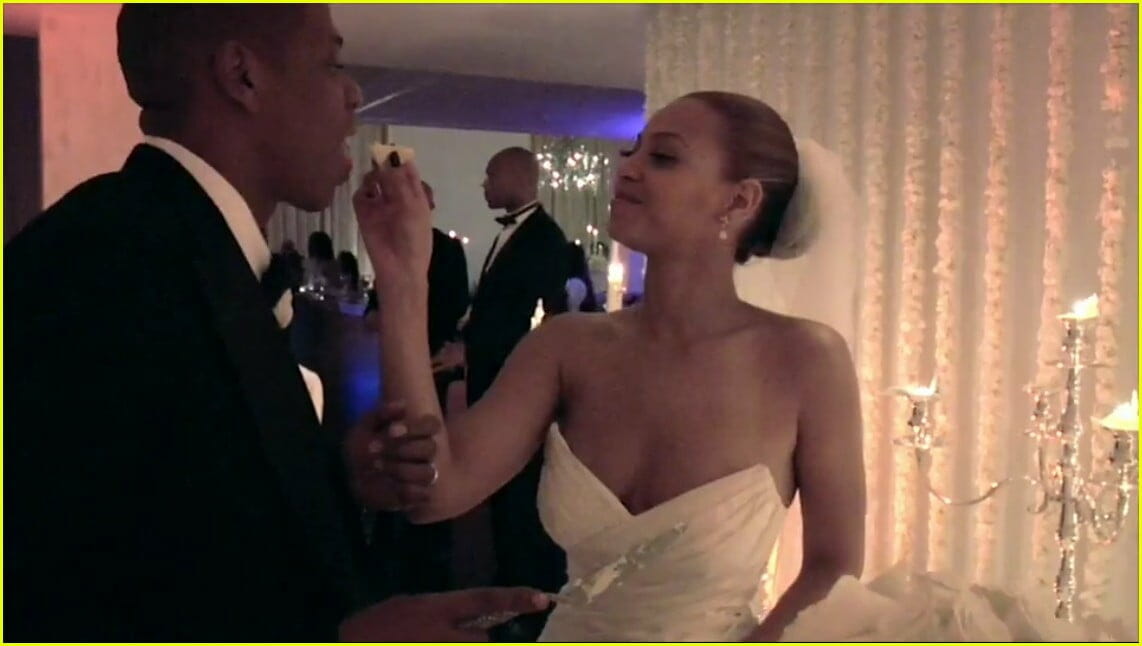 Caption: Beyonce in her “Lemonade” album visual, where she tears into the heart of a legend. Thankless bitch!

Men need to understand that marrying the wrong woman can drag you down and distort your career growth. Especially in Kenya where mothers have imparted lopsided advice to their daughters, turning them into pseudo-sluts and many become accessories instead of lifelong partners and friends.

You see the Kenyan bitches everyday. She has never spoken to you in over an year, then suddenly sends a text message out of the blue asking for MPESA. You see them everyday on Instagram and Facebook posing for model-like photos like Grace Msalame and others uploading selfies by the minute. 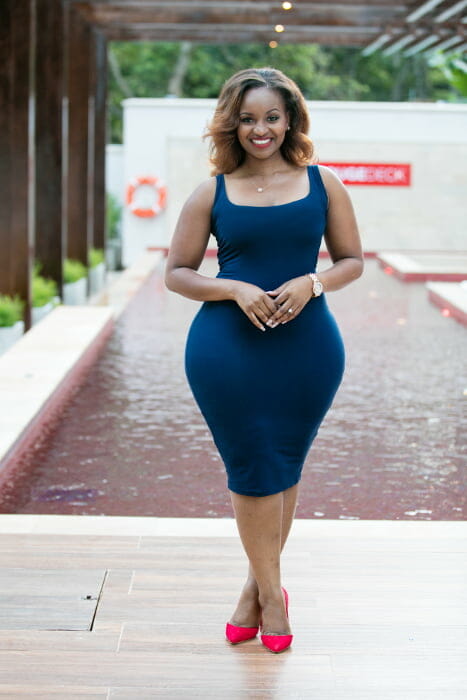 Caption: Those monster-curves on Grace Msalame’s body are a recipe for chaos. Date her and you’ll understand why such hot-looking psychopaths are single in this Nairobi.

Cross over to twitter, and those who may “think” that they’re blessed with some brains, and constantly spewing feminist-crap waxing lyrical on how they don’t need men in their lives, while others acting as perennial victims of male brutality, while it was recently revealed that “fuck-boys” is a terminology conjured by feminists and psychotic bitches, to mask their poor choice of men.

In Kenya, women blindly followed advise from mainstream media and surfed the “women empowerment” wave, which is the reason they drink, smoke and are aggressive as men. Majority think they have so much time to sleep in different beds, and make so many mistakes because life will always offer them a second chance.

Reason why we advise Kenyan men to marry normal women. Women outside your social-status, class or even upbringing. Humble women who’ve not been enslaved by consumerism and the advent of social-media as a medium for shameless self-promotion of their bodies in toxic vanity and false celebrity occasioned by number of likes.

Don’t be like Carol Radull’s husband who married her when she was way above 40 years old. Why settle for someone who wasted her youth while assuming that they had so much to offer, and almost like sizing up various offers of male interest? Marrying a woman over 40 will simply be a burden, because she will be steadily projecting her frustrations on you, breaking down your spirit and diminishing any sign of potential in your life. You will be roped into her game-plan of life, yet we very well know women are not exactly the best strategists and have no long-term view of life. 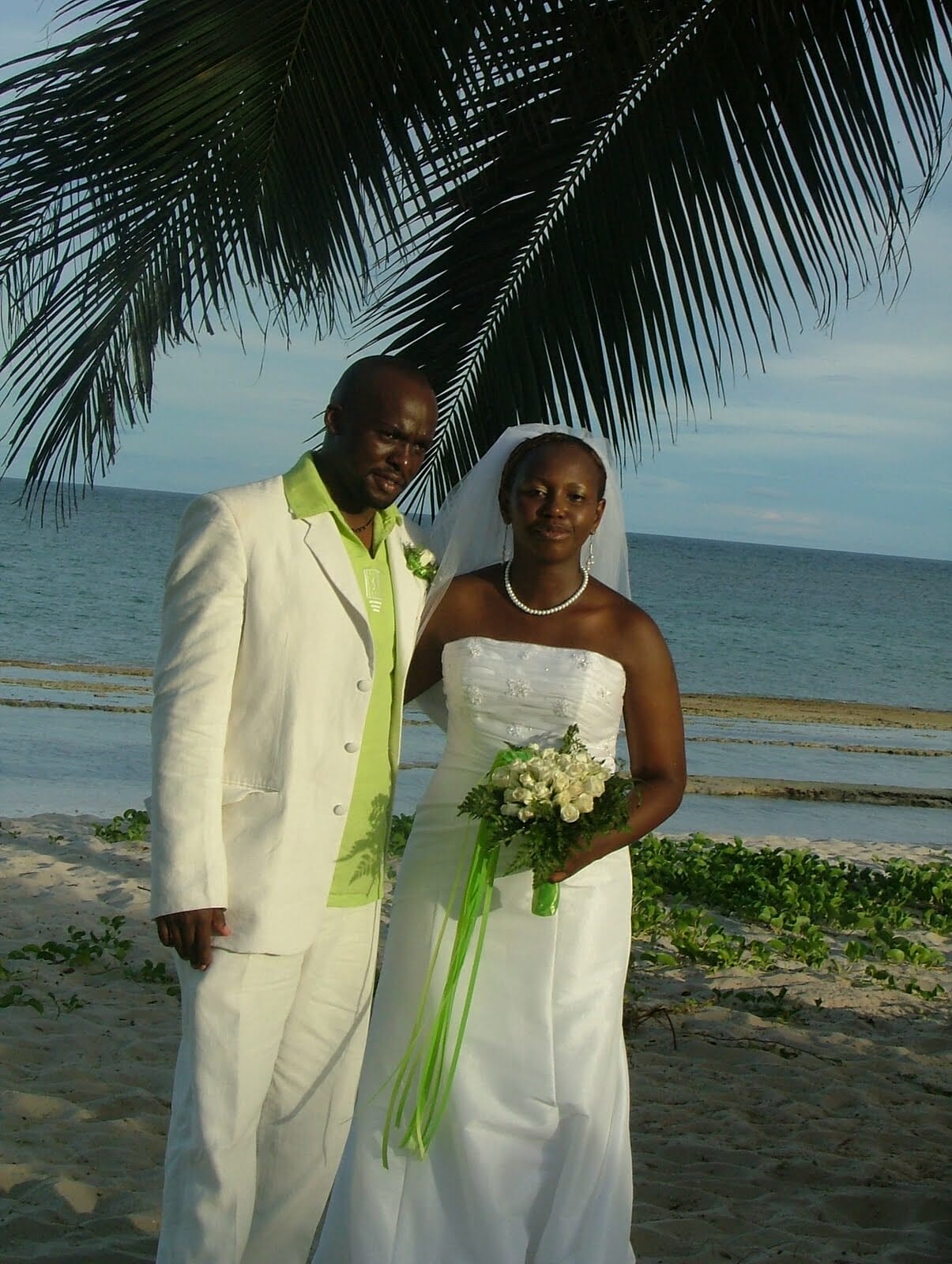 Caption: Carol Radull and her husband. Out of all the young women in Nairobi, he had to settle for an over 40-year old. #PrayForNjiru

Don’t marry single-mothers Kenyan men. These are women who consciously chose to have children out of wedlock, others left “happy” marriages because they wanted the chance to explore their sexuality, while others are simply the misguided lot whose warped view to life is the very reason why they are single-mothers. In the song “Can You Be Rich And Be Ghetto” Sticky Fingaz says the most ghetto chics are those with three (3) kids by three (3) different guys. Don’t you dare marry such a woman dear Kenyan man.

Scientists have discovered that the female brain has not evolved much from 10,000 years ago before the advent of civilisation, mechanisation and urbanisation. Their brain is still the same. Back then, they go attracted to the alpha-male, the strongest who could kill animals and feed the family. Unlike back then when an alpha-male was determined by how many animals he’d killed, today’s parameters are earthly possessions like cars, property, celebrity and others. Those are the things that turn today’s woman on.

If tomorrow President Uhuru Kenyatta decided to be like King Mswati and opened the doors of Statehouse for an annual festival where he would choose his next wife, trust me the queues would form as far as Waiyaki way. Because many women are from inferior backgrounds and were raised by sluts masquerading as mothers.

It takes intense conditioning for a woman to overcome this atrocious desire for material vanity and earthly possessions and to be content in marriage and her husband’s future and well-being. Education, religion and parental-advise all dispensed in right amounts are the only way to beat the monster that’s feminism, that normally manifests after marriage. Men should not be after women because of their celebrity or brains or ability to supplement income. A woman’s primary role is to procreate, and then support her husband. With the right kind of support, any man can soar to greater heights of prosperity.

Look at Deputy President William Ruto for instance. He married Rachel, a humble, down to earth woman who is behind his good fashion sense, stability and career progression. Unlike Moses Wetangula whose wife is constantly engaging him in sideshows that his career doesn’t need at all. 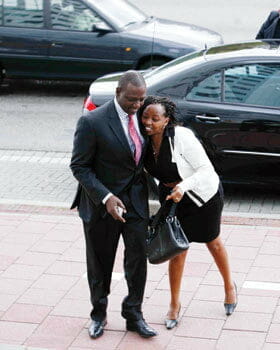 Caption: Forget the clandes Ruto is associated with, Rachel Ruto is the real shot-caller. She has made him into what other women lust for. Make your own man you simple bitches!

Do you ever expect Janet Mbugua’s husband to ever scale the heights and achieve greatness in this lifetime? Hell-to-the-no! He’s an accessory in her life. She felt she needed to exit a fast life and he was the unfortunate safety-net that has to contend with competing career aspirations, with her options being far much more than his due to her celebrity. Even the wedding venue (Chaka Place) were donated by her boss Wachira Waruru. He is the flower-girl, who has to play second-fiddle. Poor bastard! 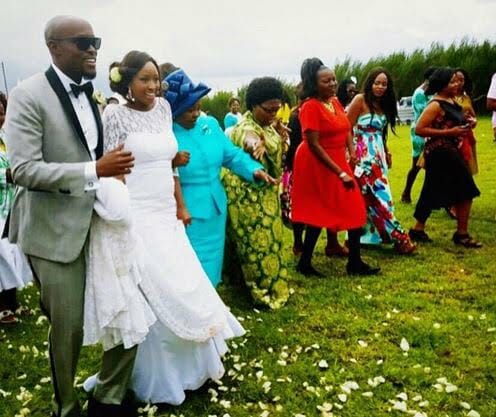 Caption: Janet Mbugua who married an accessory so as to beat the offside trap and exit the market while still on top. She is the winner, not him.

Men need to understand that you don’t need a woman’s celebrity or career to be great. You just need a normal behind-the-scenes woman who will make your life easier. She will bring some order in your life, by making food, clothes, house, and other petty stuff so that your brain can function on optimum level and you won’t need to worry and get distracted by sideshows.

There are normal women who don’t have a nasty past. There are women who don’t look up to Reverend Kathy Kiuna or watch feminists shows like Victoria Rubadiri’s Lounge. You will normal women. We all saw what happened to Dennis Okari or Kanene. They married hoe’s, and will forever live to regret. These are not women who deserve any respect and adoration in society. They should be shunned.

The other day we wrote about a woman who is Kirinyaga Governor’s clande. What did bribed, mediocre mainstream media do? They profiled her in a full-page interview. The simple bitch who conducted the interview never bothered to ask her about allegations of using older men for career progression. They simply sugar-coated her image with nonsense, which is why we will forver call for Daystar University to be de-registered. It’s contribution to Kenyan society has been catastrophic to say the least. 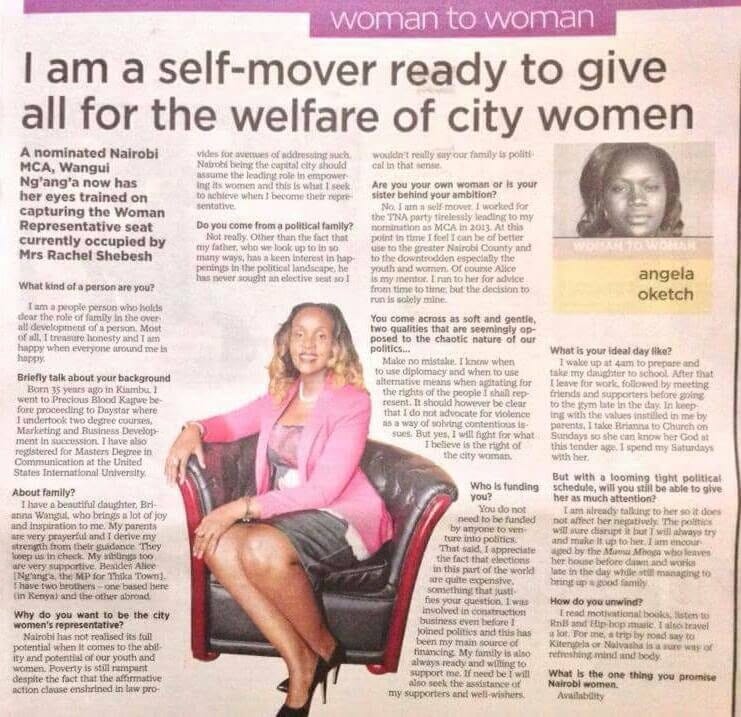 Kenyan men should stop being swept away by this desire to ascend some imaginary corporate ladder using women of so-called “high profile” and realise there’s no substitute to hard work. You have to do time. Marrying a woman because of her job or upbringing is superficial and counter-productive to your long term aspirations.

Forget the good conversations, or intellectually stimulating debates or chaotic sex accompanied by porn-like soundtracks. Those are things pseudo-feminists and psychopaths use to trap men of weak standing and those who are excited theatrics. The best couples don’t even speak. It’s almost telepathic. You see them in a hotel and they don’t even have public displays of affection. Those are the best marriages.

So what Jay-Z cheated? Did he kill somebody? He has elevated Beyonce from a basic bitch into a diva. She thinks she’s where she is due to her own abilities but it’s Jay Z who is the genius behind her. He can make a million more Beyonce’s if he wants. Heck, the nigger gave us Rihanna straight from the slums of Barbados. Men worldwide jerk-off because of Rihanna not Beyonce. He gave us Aaliyah. He is a living legend. Beyonce wants to throw away all that because of listening to a few feminists. These hoes never learn!

Caption: Beyonce an Jay Z at their wedding. Does she surely think she will find another man who will give her the life and profile that Mr. Sean Carter has shown her? Bitch be trippin!

We hereby link the futuristic “Song Cry” by Jay Z, which he must have sung to his future ex Beyonce. “They say you can’t turn a bad girl good, but once a good girl’s gone bad, she’s gone forever”…..bye Beyonce. Let our legend be!