Political temperatures in Kenya have been on a steady to rise since the country began recording low numbers of new coronavirus infections.

The battle for 2022 is taking with power games in South Nyanza promising to  get uglier with the looming impeachment of Migori Governor Okoth Obado.

The outcome of the vote at the county assembly tomorrow will have an impact on political events at the national level.

Odinga may be the region’s kingpin but his rival, DP Ruto has been making inroads and eating into his base.

He began in Kibra regarded as ODM’s bedroom and now down south in Migori and Kisii.

Migori has been a challenge for ODM since 2013 when Obado beat Odinga’s candidate in the gubernatorial race with the little known People’s Democratic Party ticket.

In the 2017 elections, Obado who had forced his way into ODM beat Ochillo Ayacko in the nominations and went on to retain his seat.

Ayacko who was regarded as ODM/Raila’s favourite failed to secure the party ticket.

Embattled Obado is a close ally of Dr Ruto. He had openly asked the residents of Migori to allow him to work with the DP for the ‘sake of development’.

Obado has been associating with the DP since his days at the helm of Kenya Sugar Board when Dr Ruto was the minister for  Agriculture.

“People want to think for me and decide who I am, and what I should do. The freedom of association is in the Constitution and nobody can take that away from me,” he said. 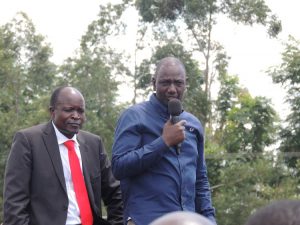 Dp William Ruto and Okoth Obado in a past event. [p/courtesy]

Obado has warned his colleagues in ODM to stop branding him the master of corruption and calling all sorts of names to tarnish his image. He also asked the Raila led party to come clean on the motive behind the impeachment and stop hiding behind corruption.

“Why are they in a rush to hound me out of office yet my cases have not been heard and determined? This is political witch-hunt being spearheaded by my opponent, who lost in the previous election.” Obado said.

Two attempts to impeach Obado have failed that ODM blames on the governor’s relationship with Ruto. ODM also claimed that Obado had bribed the MCAs.

On Saturday, ODM held a meeting in Migori led by the party’s national Chairman John Mbadi who expressed confidence in ODM’s 31 MCAs to impeach the governor.

Obado’s fate now hangs on the 57 MCAs who will have a say on the bearing of South Nyanza politics, especially if Mr Obado survives.

Obado enjoys a good relationship with the Majority of the MCAs but there is that confusion and fear whether to support the governor or take a stand with the party.

MCAs allied to the governor fear that they may be sidelined in 2022 when they seek re-election on an ODM ticket. Some may also lose opportunity to do business with the county government.

MCAs who attended Mbadi’s meeting were forced to pledge their loyalty to the party and its leadership.