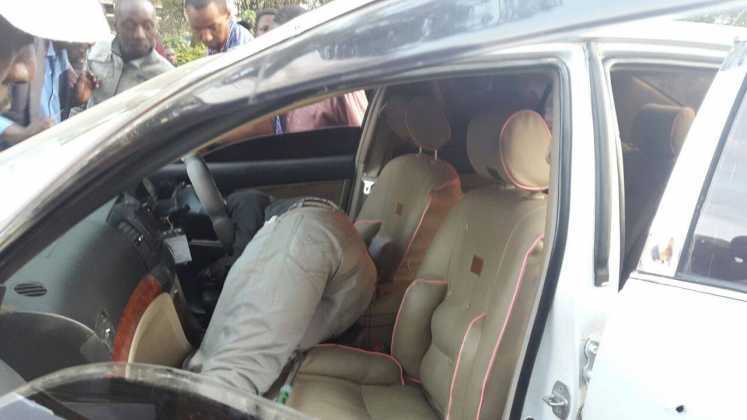 As received :
Statement of Events for Incident on 3 February 2016
Prepared by Mr Pritpal Singh Kalsi
Prepared on 06 February 2016Herein I describe the events of 3 February 2016 in order to file a formal incident report.

1. On 3 February 2016, we left our office in Athi River at 7:00pm to head home. My son Rajprit Kalsi was driving the vehicle (Toyota Land Cruiser; Registration KCA 555T). I was seated in the front passenger seat beside him.

2. The traffic was reasonably slow from RAMCO flats. Approximately 300 meters from the South C roundabout our vehicle was standing stationery in the third lane from the left.

3. The assailant, a young man aged between 20-25 approached the driver’s window with a gun in his hand and threatened my son to lower his window. I immediately called the assailant to come to the passenger window where I was seated.

4. I lowered my window and without any resistance or hesitation I handed over my cell phone. He took that and told us to give everything we have. I rapidly reached out to my pocket to take out all the money I had and as I looked up to give it to him, I noticed he had already started running off towards the side of the road in the dark because the traffic had started moving. I put my window up and told my son to drive off immediately. This was around 7.55pm.

5. As we crossed the roundabout and reached right opposite Toyota Kenya. We were positioned in the first lane from the left and once again the traffic was completely stand still.

6. The same man came to the driver’s window and knocked onto the window very hard with the bottom of his gun and told my son to open up the window. At this point the man was pointing the gun directly at me from the driver’s side. Without any further resistance my son approached to open the window immediately. The man just shot the window at blank range, shattering the glass and causing a loud blasting noise. My son fell onto the arm rest of the car. The man then held the gun in the car aiming towards me and shouted for us to give him everything. The man with the gun switched off the car and started pulling my son’s chain and watch off. My son and I gave him all our belongings; Phones, Wallets, Gold jewellery and cash Kes 40,000. On receiving the cash in his hand he just smiled and walked away.

7. I asked my son how he was, but he was not in a state to move or talk. I rushed out the car and ran to the other side to see him. As I opened the driver door, I saw a big bullet on my son’s arm. I picked his arm to see if there was any damage or wound to his body but was fortunate not to see anything. But there was shattered glass and blood all over the car roof, floor and seats. I slowly picked him off his seat and laid him on the rear seat. He was in unbearable pain.

8. As all of this was happening, no one from the general public or the cars from the traffic came to assist or aid.

9. I drove to the two policemen who were at the upper hill roundabout. Telling them what happened and requesting for aid. They just smiled away and told me that they were going to circulate the information on the police radio call. They must have heard the gun shot but didn’t help in easing the traffic or aiding me in any way. They didn’t even make any approach towards the man who shot my son.

10. I had to try fight the traffic by having my hazards on and hooting my way all the way to the Aga Khan Hospital. Where I was attended by their staff immediately. Dr Sokhi and her colleagues assisted my son immediately. She even helped me with a phone to call my family.

11. Dr Syan was called to help further aid the situation. He then called for Dr Mugal (Specialist Surgeon). The whole team got together and took my son for x-rays which showed that the bullet was still inside and that the right arm had been shattered. My son was helped into the operation theatre and after a surgery the bullet was removed and the wound was cleaned for any infections.

12. The police had come for report and questions at the hospital at around 9pm. We managed to give details of all we knew and what had happened. We also managed to locate my son’s phone using GPS which showed the last place the phone was located. It was in the same position for over an hour until it was finally switched off. We urged the police force to visit the area to see any suspect but never heard of anything. We also sent images of the GPS location of the phone by whats app to the police. But there was no news of the man who shot.

13. The next morning my elder son called the British High Commission Kenya to inform them of what has happened as all my son’s are British citizens and are only on holiday in Kenya. The lady on the phone heard the whole conversation and without any sympathy the only thing she could say is ‘NEXT TIME YOU VISIT KENYA PLEASE GET A TRAVEL INSURANCE’. My son was very shocked and couldn’t believe that there was no support or aid.

14. My son Rajprit Kalsi who has had to experience all this is to have a major surgery to his arm on Saturday 6th February at the Aga Khan hospital. With the recovery time frame which is completely uncertain.

15. There was NO aid by the local police neither the high commission. The man who shot has not been targeted or approached in any way. Just wanted to thank the team at Aga Khan. Especially Dr Sokhi, Dr Syan and Dr Mugal who approached my son at the right time to help him survive.