A member of the Building Bridges Initiative (BBI) taskforce has revealed that the version of the report handed over to President Uhuru Kenyatta and ODM leader Raila Odinga at the Kisii State Lodge on october 21 is a doctored one.

Retired Major John Seii said their report did not include a proposal to introduce the position of the prime minister and two deputies.

The report that was officially launched at the Bomas of Kenya on October 24 wants to expand the executive by introducing the PM office with two deputies.

Major Seii was categorical that PM position was not part of the initial report that the task force agreed on.

The member of the taskforce also revealed that Kenyans did not ask for that position so they could not propose its introduction.

The report took too long to be brought out since it was taken back to be revised after being launched in November last year.

The proponents of BBI document, President Kenyatta and Odinga must have read from different scripts on this. 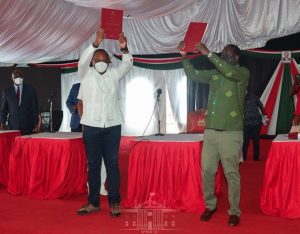 Kenyatta’s politics has never been about creation of more positions, in fact it’s one of the reasons he crashed OKOA Kenya in 2016.

But Odinga has been all about the premiere position anytime he thinks about amending or overhauling the law.

From 2002 when he backed ex President Mwai Kibaki to be the then KANU candidate Uhuru Kenyatta.

The Retired Major further disclosed that they only agreed office of the official opposition.

The office aims to address the issue of winner takes its all since there would be a proper ground for the runner up to keep an eye on government.

Major Seii who doubles as Chairman of Nandi Council of Elders spoke at Emoo Fm added that the taskforce never discussed adding more seats in parliament.

Former researcher Adams Oloo who sits at the taskforce is one of the long time Raila sycophants who must heed to Baba’s demands.

The president claimed that the BBI report is not about creating positions for individuals as opponents argue that creation of new position will only benefit a few on top. The dynasty.

“The BBI report is not about creating a prime minister’s position or president for anyone, this report is not against anyone or targeting anyone, it is about 50 million Kenyans,” Uhuru said.

Tangatanga argues that Odinga who likes crafting coalitions wants to use it to gift allies who will support his 2022 presidential bid.

He can also use it to tame the appetite of possible competitors like retiring governors.

Kakamega Governor Wycliffe Oparanya is always behaving like he has been promised a Deputy Prime Minister position to ‘finish’ Raila opponents in Western.

KABU boss Gideon Moi has been rumoured as Odinga’s possible running mate while Peter Kenneth is jostling for the PM position.

Another DPM position would be gifted to people like Kivutha Kibwana if he doesn’t join DP William Ruto.

ODM loudmouths like Embakasi Mp Babu Owino let it out that ODM wants the president to make a come back as the PM.

President has repeatedly said that he is not interested to serve beyond 2022. He will be retiring when Odinga who is also pushing the creation of PM position will be making a fifth stab at presidency.

If adopted in its current form, PM will be appointed by the president from the party with the majority members in Parliament.