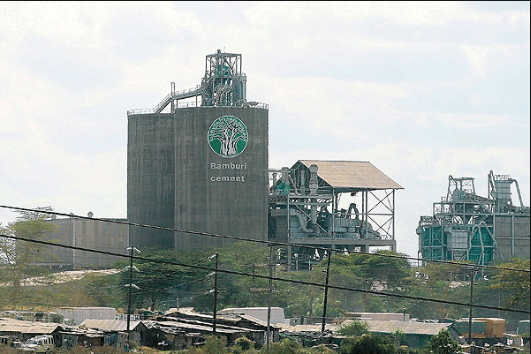 Thank you for posting the concerns I raised with you earlier. I again write to further register my concerns with the way the matters I raised are casually being handled. Let me now dissect the impact of the Bamburi Cement Mombasa Plant Manager’s (Mohamed Kharraki) continued stay in the Organization will have on our National economy.

When Bamburi Cement Mombasa sneezes the Nairobi grinding Plant, Bamburi Special Products, Lafarge Ecosystems and the Corporate Office catches a cold, the Mombasa plant is sneezing, but no one is bothered, it will soon start to cough and eventually be bedridden in an industrial ambulance to the industrial ICU. It is after its admission that technocrats will be called in to resuscitate it from its deathbed in vain. What are the impacts?

If Bamburi closes operations today KPLC will actually lose a chunk of its finances (Bills paid by the Organization), what does that mean? Economic growth will stagnate.

With the company not able to produce clinker and cement because members of staff have been abused, intimidated, terrorized, overtimes not paid, on-call allowances not paid, bonuses paid out indiscriminately (By the Plant Manager Mohamed Kharraki), the workers have lost all the morale thus poor production (already being felt) people are demoralized and all the gains made over the years are being eroded at a supersonic speed,the one million tonnes of clinker achievement in 2015 will never be achieved (not even to come near).

To the shareholders continue burying your heads in the sand while a foreigner is toying around with your hard earned investments, your dividends will drastically go down. Remember for the first time last year Bamburi announced a profit warning, this should be a wake-up call for you to start worrying about your investments.

Its only KRA would know how much they are losing in terms of revenue from the unpaid overtimes, on calls, bonuses and eventually when the Company makes loses as a result of poor production caused by staff being demoralized. All the unpaid overtimes, on calls, bonuses should be paid to the affected individuals so that KRA can get their PAYE. What Kharraki is doing is National Economic sabotage a crime that should be ruthlessly dealt with the same way the Government is fighting corruption.

Mr President, Parliamentary committee, DCIO, DPP, EACC, Immigration and all the relevant government agencies should launch investigations into these concerns before this man runs down our once giant Cement Manufacturer in the region.

He is literally killing our economy. If employees are abused, intimidated, their rights thrown to the dustbin in their own Country by a foreigner, production goes down, profit margins decrease thus less revenue collection. I challenge our President to intervene because the Company is doing nothing even Managers are intimidated.

Action be taken before its too late, he is on leave now and when he comes back from Morocco he is going to be an Industrial Director. Can’t we get people with qualifications to be Plant Managers/Directors??? Must we import?