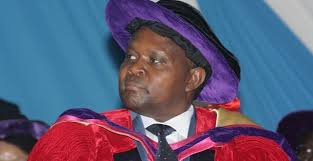 The management ghosts haunting the University of Nairobi are spreading their wings and tentacles wider and spreading the venom at the country’s respected higher institution of earning.
The latest casualty in the unending crisis is the entry of officials of three unions representing workers at the institution.
University Academic Staff Union deputy treasurer Mohammed Mwachiti says the battles have divided workers. We have since established, Uasu top rank are bitter with their two officials Nyandemo George Samuel and Omondi George. They are accused of having pocketed over Sh500,000 each during a trip to China by university management.
The duo last week released a statement calling on the university council and Education cabinet secretary Joseph Kaimenyi to intervene.
Sources told us, the vice-chancellor is a worried man after establishing the parliamentary committee on education is digging into and is set to unearth ill-hapenings. To survive, he wants the committee proceedings to stall at all costs hence the call by his allies in the trade union.
To complicate matters is the report released by Kenya National Auditor office which is in the hand of the legislators.
The report has raised issues with appointment letters for council members. It has questioned the representation on the council of principal secretaries of National Treasury and ministry of Education. They attend meetings in person when it is illegal. Arthur Nduati represented PS treasury during 120th meeting with Samuel Kiiru appearing in special council.
For PS education, Bernard Malenya and Milton Njuki were present during special council talks.
The auditor says in the absence of specific letters appointing the four to represent their respective PS, it is impossible to confirm the legitimacy of their presence and representation.
Legal experts say, in short, the university council the way is constituted now is illegal and has to be dissolved.
The decision it has been making are not binding at all. The auditor also accuses of various mismanagement practices. It questions the issuance of temporary imprests. On January 27 2015, Nairobi University issued a temporary imprest of Sh200,000 to one of the secretarial staff for the purpose of purchasing unspecified hardware item for the refurbishment of VC official residence.
The hardware items according to the report were not sourced from prequalified suppliers and adequate explanations were not given as to why the low value procurement threshold was not observed.
It reveals, numerous and huge beyond Sh10,000 petty cash payments on allowances, casual wages and consumables is perfected. No approval of cash float documents were availed for verification.
The report unearths long overdue creditors and non-payment of debts on timely basis. This has led to strained business relations between the university and its suppliers.
Fear is, suppliers will force the university to pay in advance for goods and services.
The university is also entangled in a long over due debt of Sh4,922,704 owed by open university of Tanzania for which evidence of efforts made to recover was not availed for audit verification.
At Kisii Extra Mural Centre, books worth Sh23,000 were lost. They were bought from Unes bookshop.
The report further says, records held by the university show officers who had resumed their teaching jobs at the university were drawing salaries and allowances that were not commensurate to their substantive appointment and grades.
Variation of construction contract. The report exposes that during 2012/2013 financial year, UON entered into construction contract with China Wu Yi for building University of Nairobi Towers.
However, vide a letter reference number OUN/PROC/CA/1/8 VOL/of October 2014, it notified the contractor that due to Geo-Technical (ground conditions) and other necessary changes to original design, a variation of Sh567,083,664 was approved.
The approval was granted by a special tender committee held on October 9 2014 after a regular tender committee meeting on October 7 2014 deferred the same.
It reveals, the cumulative variation was sought and granted when the building was at level 12 and the same represented 24.9pc of the total contract sum against the maximum allowance cumulative variation of 25pc raising serious concerns as how the university will handle any possible future variation requests.
Further, it was not established how the budgetary allocation was approved in two days and at what level.
The university is challenged to explain why a geo-technical survey was not conducted prior, to the commencement of the project and whether the redesigned building was reapproved by the relevant government agencies.
It is on these grounds a section of trade union official, fearing the council chairman and Kaimenyi have been compromised and taken sides have thrown their weight behind the parliamentary committee to solve the crisis.
They claim, a move has been hatched by the chairman, Mbithi and Kaimenyi to cripple the operations of the office of deputy vice-chancellor Academic and Finance and have it scrapes.