President Ramaphosa who is the current chairperson of African Union also called for dialogue to achieve peace and stability in the West African nation.

Kenyan President Uhuru Kenyatta called  for a “speedy, peaceful and democratic” to solve the leadership crisis while Congo’s Felix Tshisekedi urged African countries to take a firm position on the matter he said is very dangerous.

The leaders spoke on Thursday night during a virtual meeting of the African Union Bureau where the leaders were brief each other of the covid-19 pandemic. 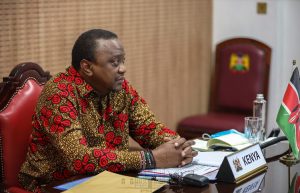 Tuesday’s coup led to the detention of Mali’s president Keita at is residence in Bamako. Soldiers at Kati Military Base near Bamako had rounded up senior civilian and military girls earlier in the day.

Mali is already facing a jihadist insurgency and the Tuesday’s coup and detention of senior government officials is pushing it deeper into leadership crisis.

Mali’s state owned Tv went offline after the detentions and only resumed later in the evening with pre-recorded programmes.

​Detention of President Keita prompted hundreds of anti-government protesters to into a central square to celebrate the ouster.

Keita was accused of massive corruption, insecurity in the north where Islamist militants are very active.

The virtual meeting of the African heads was also attended by representatives of Regional Economic Communities (RECs) Director of Africa CDC, Dr John Nkengasong and African special envoys on Covid-19.

Dr Nkengasong while making his report to the leaders said that despite crossing the one million mark of Covid-19 infections, Africa witnessed a 37% reduction in reported daily infections in the last two weeks.

He said hopes are high with the world having up to seven Covid-19 vaccine trials nearing approval by World Health Organization (WHO) approval and Kenya is one of the four African countries that are participating in the clinical trials.

Nkengasong said Africa will vaccinate 60% of her population at an estimated cost of 10 to 15 billion dollars when the Covid-19 vaccine becomes available.