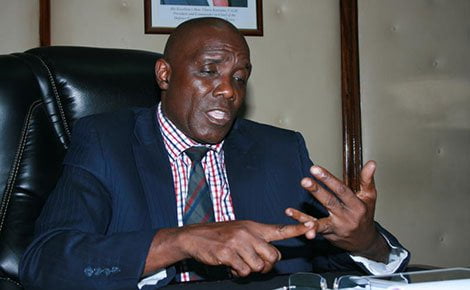 Caption: The Most Corrupt Nincompoop Mohammed Swazuri . He helps Land Cartels Forge Titles to Grab Land at a Commission . This Idiot should be shot by firing squad

For all who didn’t know, National Lands Commission (NLC) Chairman Muhammad Swazuri has married four (4) wives. His insatiable greed for grabbed land is largely inspired by his wives, who are each pressuring him to give them land.

Swazuri is now at the grid of Kenya’s land registry, where he has taken it upon himself to steal every available parcel of land that has a slight discrepancy.

All these parcels of land are then off-loaded to cartels that involve individuals like Evans Kidero, Mike Sonko, Kiprono Kittony, Frank Nyagah Njeru and the likes. Swazuri prefers to take cash from the cartels who acquire the land from unsuspecting land owners.

How do you evict someone that has been living on a parcel of land since 1972? Well this greed, which has been incubated by the Jubilee regime, coupled with the wanton corruption by the Judiciary, has precipitated this crisis, which involves even members of the National Police Service.

The “leaked” audio from Nairobi Senator isn’t convincing because he seems bitter with the land-grabber, probably because he wasn’t given a his share of the loot.

Sonko cannot be trusted especially as regards to purporting to fight for poor people’s rights, because he’s part of the cartel that has been involved in land fraud.

Treat that “leaked” audio with the contempt that it deserves.

Moving on, Muhammad Swazuri has made Kenya unattractive to foreign and local investment, as his meddling with land issues in a bid to grab land has led to fear. Nobody wants to invest in a factor of trade which is subject to the erratic effects of corruption.

The land which is not conceded to cartels, is transferred to his many wives and children, and we cannot allow the greed of one man, to satisfy his idle wives, ruin this country. This economy cannot be controlled by Swazuri’s greed.

The information we are giving isn’t new, and the National Intelligence Service is aware. But the idiots at NIS spend their days tapping phones of bloggers, instead of sharing this information with other arms of the Government, to initiate his arrest and prosecution.

NIS needs to be disbanded/reconstituted or its budget cut to quarter of their current allocation, because those idlers only know how to bug the phones and whatsapp messages of bloggers.

We now launch this campaign #ArrestSwazuri calling on the security apparatus of the country to act with speed, and deal with this menace once and for all. The only common denominator in all these scandals is Muhammad Swazuri, and Kenya shouldn’t bear the burden of his greed to satisfy his 4 idle wives. Let those women work like the rest of us, not just sit at home waiting for Swazuri to steal land on their behalf.