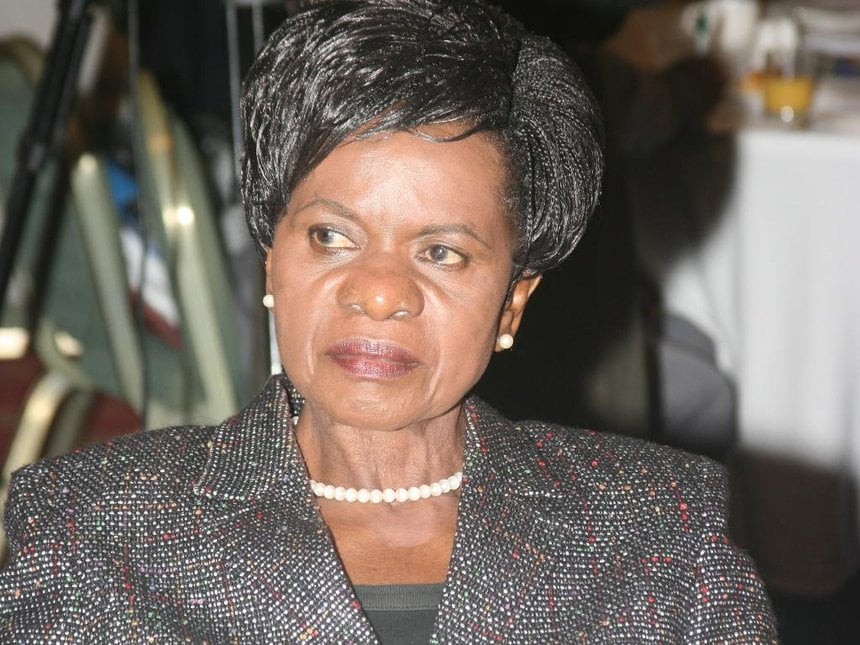 CAPTION: This moronic grandmother is part of the rot in the Kenyan education system. These are the idiots that we need to be jailing by now. These are far much worse than murderers.

A shocking story was sent to us, on how this Luhya grandmother calling herself a Professor, made graduates travel all the way to Busia, for a graduation, simply because she has been vying as MP for Funyula Constituency.

Julia Ojiambo is perhaps the most visible stalwarts, masquerading as an educationalist, yet her brain is full of nothing but filth, air and water.

Over and above ruining the lives of students of the Kenya Nutritionists and Dieticians Institute, this Julia Ojiambo Bitch was also part of the team that created the 8-4-4 system, which has become a conveyor belt for mediocrity.

Kenyan graduates are not competitive globally because instead of being taught, we were drilled by dumb teachers trained under a toxic curriculum formulated by amongst others,

These 17 idiots including Julia Ojiambo must be arrested and held to account for formulating a system which created robots subservient to the elites of the day. Idiots who can’t connect dots between their current plight to the political rot in the country.

Those 17 bastards should be named and shamed for consigning an entire generation into the anals of mediocrity, for entrenching them in a retarded education system, which overworked them with paperwork which is irrelevant to the current market requirements.

These 17 rodents including Julia Ojiambo should be lynched by angry mobs wherever they are spotted because this education system has created robots, unable to think for themselves, further compromising our national productivity and output.

For instance, members of the Kikuyu community have been earmarked as some of the dumbest individuals North of Limpopo and South of the Sahara, because even after the Jubilee Government has screwed them over from their jobs, to their security, to their businesses, they still are loyal and subservient to the Kenyatta-family, who have used education, religion and media conditioning to brainwash them that he was announced by God. How can God anoint an alcoholic and chain-smoker?

Julia Ojiambo has been operating the Kenya Nutritionists and Dieticians Institute (KNDI) like her personal property, looting coffers so that she can campaign for the Funyula parliamentary seat using money paid by students.

This problematic hoodrat called Julia Ojiambo has been at the heart of the collapsed education system in Kenya. We shouldn’t allow such idiots anywhere near the function of policy formulation and implementation. 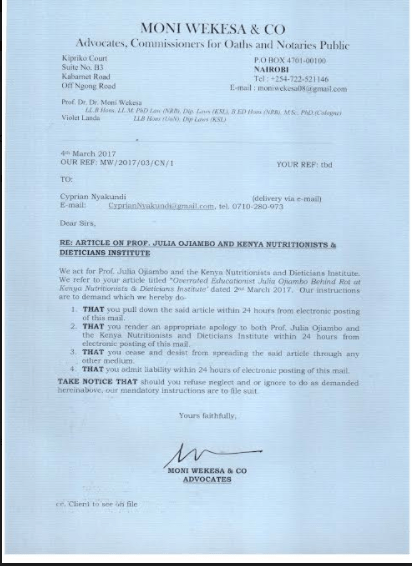 CAPTION: The cheap threats Julia Ojiambo has been issuing us since we exposed her as an intellectual-fraudster.

It’s the reason we are asking Fred Matiangi to stop with the publicity stunts and tell us how far he has gone with abolishing 8-4-4. He shouldn’t listen to old retards like Wilson Sossion because the future of our children, won’t be at the discretion of Sossion, whose only priority is to marry another wife.