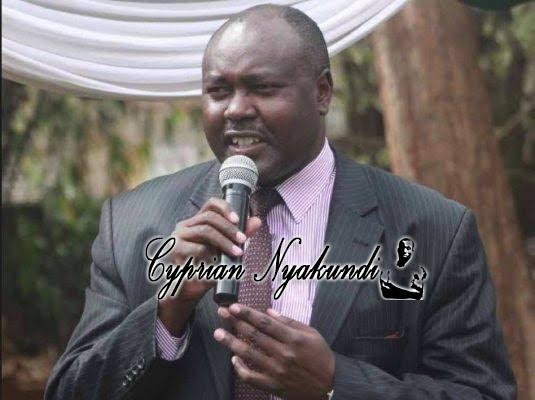 NTSA Boss Francis Mejja. He was bribed by Somali cartels to mount Alcoblow all over the city, so as to kill Nairobi’s nightlife.

In 2013, the misguided Alcoblow initiative was re-introduced by Uhuru Kenyatta, himself an alcoholic, seemingly to curb drink-driving which was hyped as the leading cause of road accidents. Of late, Githeri media’s Emmanuel Juma is being bribed to re-introduce it back to people’s minds through scare-mongering by NTSA.

But statistics have shown that Public Service Vehicles which largely occur during the daytime, are the leading cause of road accidents. Meaning that the harassment of motorists by NTSA was just an extortion mechanism meant to enrich a select few.

Once bustling with economic activity, Nairobi’s CBD has become a ghost-town at night after two concurrent state interventions. Evans Kidero, himself a thief of epic proportions, banned prostitution in the Central Business District along the famous Koinange Street where CS Mwangi Kiunjuri used to frequent looking for pussy.

Secondly, Francis Mejia the head of NTSA embarked on the misguided Alcoblow project, strategically mounting roadblocks in all arteries leading into and out of the Central Business District.

The ripple effect of this blockade and unofficial curfew imposed by retarded bureaucrats, led to the death of the nightlife in the CBD, with major outlets posting immense losses. Coincidentally during the same period, there has been a mushrooming of Somali restaurants in Nairobi’s CBD, especially in the former pubs and joints that we used to frequent.

No one would have described Mizu Sushi Lounge in Puerto Vallarta, Mexico as nondescript. It wasn’t a traditional Mexican restaurant by any means. Patrons dined on deep-fried sushi rolls, and washed the quasi-fusion food down with icy glasses of sangria. Mizu hosted anniversaries, birthdays, and Oscar-viewing parties — and guests made sure to document each boisterous celebration on Facebook. In fact, more than 500 people “checked in” to Mizu via various social media platforms, and many gave it high marks on online review sites. It was a place to see and be seen.

In September 2015 the U.S. Department of the Treasury’s Office of Foreign Assets Control (OFAC) deemed five Mexican businesses “Specially Designated Narcotics Traffickers,” froze each business’ assets and prohibited any U.S. company from doing business with them. All five businesses were found to have laundered money in order to provide financial support to Mexico’s Cartel de Jalisco Nueva Generation, an international drug trafficking ring. Mizu Sushi was one of the five.

The success of a money laundering operation hinges largely on one action: getting the dirty money into the bank. Myers offers an example: “Let’s say I’m with a Mexican drug cartel. I have a lot of money from selling cocaine. So I want to take the cash from that illegal activity and turn it into clean money. So, I go out and buy a restaurant. Every day, I collect my restaurant receipts to take to the bank and make a daily deposit. But I also take a major portion of my drug proceeds and mix it in with my restaurant proceeds. Then, I make the deposit. Because I am doing this continually, and as long as the cash stays roughly within ten percent of the same amount every time, the bank won’t be as suspicious. Because you would expect a restaurant to have all that cash on hand. It looks like sales of food and alcohol.”

So really, Francis Mejja was bribed by Somali cartels to kill Nairobi’s nightlife so that Somali’s can take over all pubs/joints and convert them into Somali restaurants to be used as fronts for money-laundering and funding other illegal activities such as terrorism. This was a very conscious and deliberate move. So it came as no surprise that NTSA had registered the vehicle which was used in the Riverside Attack.

So an alcoholic re-introduced Alcoblow, and a thief banned prostitution in the CBD. These two bastards wanted to give the impression that they were working in the best interests of Kenyans, whilst pandering to the Githeri-induced masses who are equally religious/church-going degenerates, who masquerade as saints.

In Kenya, religion has been projected as an economic activity whereby Githeri clergy like retired/retarded former Anglican Archbishop Eliud Wabukala is now serving as the moribund EACC, which only arrests petty offenders and traffic police officers. “Nabii wa Mungu” and scare-monger extraordinaire Bishop Owuor moves around with police escort. We appointed a Central Bank Governor Patrick Njoroge not out of competence, but purely because of his Opus Dei nonsense.

As you can see, religion has choked our economy to the brink of collapse. Yet despite all the money that they make, churches remain untaxed and unregulated.

Picture this; these criminal outfits known as “churches” have harambees to build ‘church’ schools and then charge the guys who build the school to have their kids school there exorbitantly. They have harambee’s for church buses but it’s out for hire 5 days a week. Even more harambee’s to construct hall/youth centers but for hiring out to the same youth.

Now churches have gone full-throttle into business. They’re building flats, owning massive properties, guest-houses and the likes. They don’t pay taxes for these as the accounts are lumped up with church books. Surely, isn’t this criminal? So this unholy matrimony between Jubilee and churches is coming at a huge expense to the country. If you see your MPig bending over backwards to accommodate religious degenerates, then know that you’re in trouble.

Churches should be heavily regulated and taxed. This freedom we’ve accorded them, allowing their toxic input to be turned into policy will hurt our economy. It is these sanctimonious, self-righteous hypocrites who instigated the closure of alcohol manufacturing firms, which pay taxes while they don’t. We cannot have investors being harassed just because some shitty pastors complained. Who the fuck do they think they are?

These unholy matrimony between church and state needs to come to an end. Just like betting, religion should be taxed extra.

So it cannot be a coincidence that NTSA conspired to kill Nairobi City’s nightlife, so that joints and pubs can be taken over by Somali’s and the same NTSA issued counterfeit license plates for the vehicle used in the Riverside Attack. Francis Mejja has been aiding and abetting terrorism in this country.

Before anything else, Francis Mejja should be arrested to explain this coincidence and the logic he used to mount Alcoblow in all arteries leading into and out of the City. It’s not the first time I’ve raised this, and the fact that authorities ignored my observation led to the Riverside Attack happening.