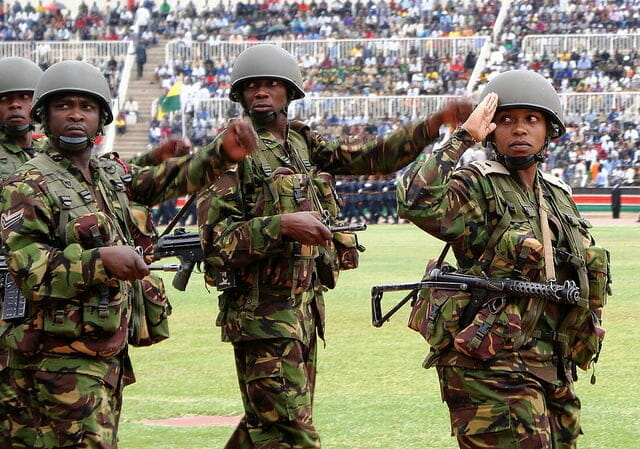 Lesotho’s army will be confined to barracks when the small mountain kingdom votes Saturday in a snap election to break a political deadlock after an attempted coup last August.

With tension rising after a bystander was killed and two of Prime Minister Thomas Thabane’s bodyguards were wounded in a shootout with soldiers earlier this month, the military had planned to set up roadblocks in the capital Maseru.

But that idea was swiftly nipped in the bud by the Southern African Development Community (SADC), a regional bloc that has been guiding Lesotho out of the crisis since the attempted putsch.

Instead, SADC will deploy 475 police from its member countries to provide security support during the election.

The latest troubles in the kingdom — which is completely encircled by South Africa — erupted on August 30, when soldiers surrounded police headquarters, killing one officer and looting weapons.

Thabane fled briefly to South Africa after being warned they were coming for him next.

The political situation had been deteriorating for months after Thabane suspended parliament to avoid a vote of no confidence that would likely have seen him ousted from power.

Thabane’s fragile coalition government, in which his All Basotho Convention (ABC) did not hold the majority of seats in parliament, was expected to fall to Democratic Congress leader and former prime minister Pakalitha Mosisili.

The day before the army attack, Thabane fired the general Mosisili had appointed as head of the armed forces a few years earlier, Lt Gen Tlali Kamoli.

After South Africa stepped in, Kamoli, his replacement and the police commissioner were sent into temporary exile.

But analysts say little has been done to address the security situation and the simmering hostility between the army and the police.

“This is a band aid solution,” said Tsoeu Petlane, analyst at the Transformation Resource Centre in Maseru.

“It hasn’t addressed the heart of the issue that was on the table to start with.”

The fact that no decision has been made on how to deal with the alleged plotters “may lead the military to believe they are not going to be held to account for the past violence”, said Institute for Security Studies analyst Dimpho Motsamai.

“The message it sends to them in terms of deterrence is very weak.”

Not that violence is expected during the voting: a peaceful first round of special votes for journalists, observers and others went off smoothly last weekend.

But analysts say there could be trouble if Thabane — who is seen as favoured by South Africa — wins outright with a large majority.

“If the ABC wins,” warned Motsamai, “there will be electoral violence.”

About 20 parties are contesting the election. While no reliable opinion polls have been conducted, the ABC and the Democratic Congress are generally seen as the front-runners.

Ideological differences between the major parties are difficult to pin down, with both promising the population of some two million people more jobs and less poverty.

Lesotho, which has lived in the shadow of its bigger neighbour throughout its history, is no stranger to political upheaval and South Africa has intervened twice before.

“There’s a general national acceptance of the intervention, but it comes with embarrassment — that we should have tried to sort out our own problems,” said Petlane.

Lesotho’s economy is heavily dependent on its neighbour — but in turn, its stability is crucial to South Africa, which needs to safeguard the multi-billion dollar Lesotho Highlands Water Project that supplies water to its economic heartland around Johannesburg.