On 28th October this year, Kenya Airways made the much hyped 16 hour inaugural direct flight to New York. The flight dabbed #KQNBONYC received intense publicity online from media personalities and online influencers in what they called a “game changer”.

Anyone who dared question the sustainability of the daily direct flights to New York and back was immediately shut down for being “negative” and not joining the nation in celebration of the huge “milestone”.

Just a few days after that first trip that had 234 people on board, the hype looks to have slowly died down. A Twitter user (@Kamaitha) on her way to New York decided to document her experience on social media and ended up backing the point many Kenyans had expressed before.

It all started after she realized the waiting area had a surprisingly low number of people with roughly one hour to take off. A number that only managed to grow to around 45 by the time they were boarding the flight, with only a few on business class. 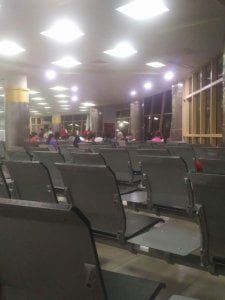 A group of roughly 30 passangers awaiting to board a KQ flight to New York.

Once everyone was seated and buckled up ready for take off, some passengers including her, had the whole set of three seats to themselves. She even had her luggage lying next to her in the almost empty plane. 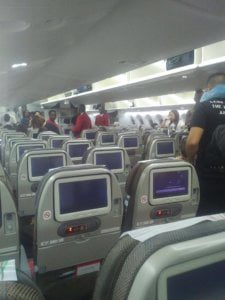 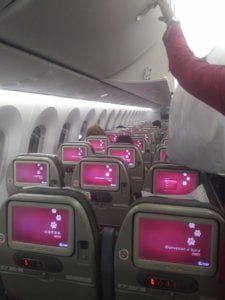 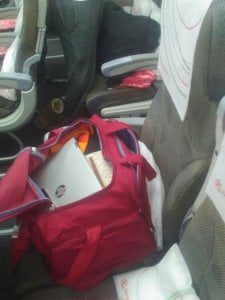 So much space: Passanger decides to use empty seats next to her to keep her luggage close.

This isn’t the first time the government has poured praise on one of their projects. The last time it happened was during the launch of the Standard Gauge Railway (SGR) which ended up becoming a huge disappointment with cabins often leaving half empty.

The project was also met with challenges as importers insisted on using road transport to move their containers which was much more effective as the SGR was marred by controversy.

Are the daily flights to New York a sensible approach or this is yet another white elephant from a government desperately struggling to leave a legacy? You call this a game changer? We are not even in the game.