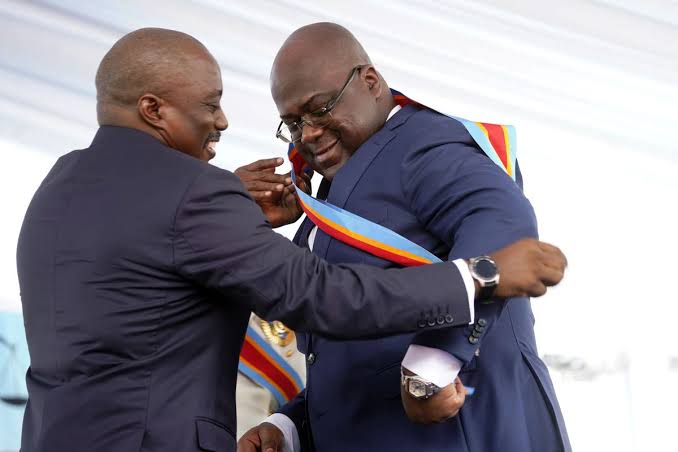 CAPTION: Joseph Kabila and Felix Tshisekedi during the inauguration ceremony.

On Wednesday, DRC President Felix Tshisekedi and his predecessor Joseph Kabila held talks and agreed on a possible coalition government.

Despite a peaceful election and transition of power, Tshisekedi has found himself in a difficult situation as he hasn’t been able push through his choice for the country’s Prime Minister position since Joseph Kabila’s party Common Front for Congo [FCC] holds the majority number of members [342 out of 485 seats] in the national assembly.

The bloc representing Tshisekedi has only about 50 members.

Therefore, when they met on Wednesday, Tshisekedi made it clear that in order for him to be able to govern and implement his agenda for the nation, the two parties [FCC and CACH] “are affirming their common will to govern together as part of a coalition government”.

“The president that I am will not accept being a president who reigns but doesn’t govern.” said Mr. Tshisekedi.

The joint statement that they released went on to say that the decision would aim to preserve the “achievements of the historic peaceful transfer of power that took place on January 24, 2019 to strengthen the climate of peace and stability of the country… and facilitate the rapid establishment of a government”.

This comes just a week after Tshisekedi, in a visit to Namibia, complained of his inability to assemble a majority to back his choice for the Prime Minister’s office.

While this happens, Tshisekedi’s main competitor in the December polls Martin Fayulu has turned down the M.P position offered to him and insisted he was the rightful victor in the recently completed polls and that such a position is nothing less of an insult.

Fayulu has maintained his intention to contest the poll’s results in court.