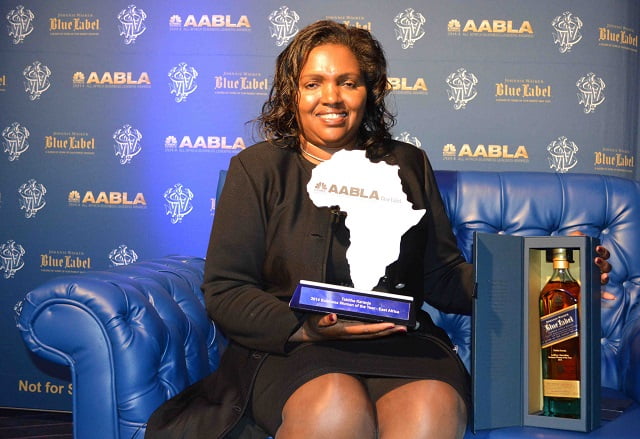 Even as we are bombarded with narratives of success and glamor by the Keroche fraternity, it seems that they hustle just like everyone of us does, once again proving that not all that glitters is gold.

Keroche Industries famed for taking on giant Brewer East African Breweries Limited (EABL) is no stranger to confrontation, after a bruising battle with Kenya Revenue Authority (KRA) over tax arrears and not forgetting their main rival who poured money into the media to undermine her entry from fortified wines and into beer manufacturing.

We also had former Naivasha MPig John Mututho who was paid by EABL to formulate a law that targeted it’s competitors while leaving it unscathed. Not to mention a conspicuous visit by Diageo’s global head at Statehouse, where it is rumored that he instigated the illegal crackdown on indigenous manufacturers, who were hurting their bottom line. MPigs were then summoned to Statehouse and asked to supervise the demolition of any company manufacturing alcohol whether licensed or not. The only company untouched in that operation was (surprise surprise!) EABL.

We are informed that a woman who had imported manufacturing equipment worth Kshs. 40 Million in Nakuru, died of a heart-attack after her premises were invaded under that guise. She had borrowed that loan from a bank.

In EABL’s thinking, their success can only be guaranteed in the absence of competition, a thinking acquired after operating un-challenged for decades in the Kenyan, market. That the Kenyan market was created for the sole purpose of EABL’s comfort and any disruption must be eliminated.

Mututho has now joined forces with Kiambu Governor Ferdinand Waititu and they’re now going on the offensive targeting bar-owners and liquor-store suppliers, because once men reach their age, they stop using their brains and start thinking with their buttocks.

It is now dawning on Kiambu residents that outside the role of deposing the former arrogant Governor William Kabogo, Ferdinand Waititu has no significant value to add to their County. When retiree’s like Mututho are the ones advising a buffoon like Waititu, then that County is headed to the dogs.

We hear that Mututho loathes alcohol because it killed his brother. Well who gives a flying fuck about your fuckin brother? He drank himself silly, he died, so what? He won’t be the first nor the last. So go fuck yourself you old fagget! Look for something better to do with your time, like DIE! Hang yourself or go jump in a lake. Lake Naivasha to be precise. 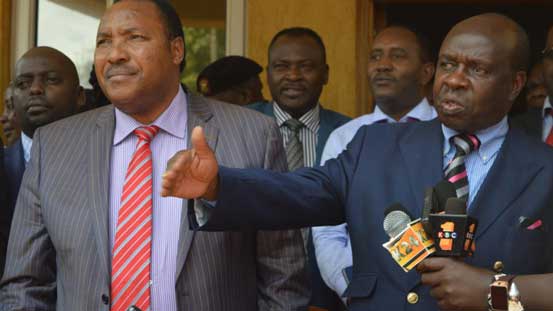 CAPTION: Certified-moron Ferdinand Waititu procured the services of retiree John Mututho, to craft a retrogressive law targeting investors and projecting alcohol/entertainment as an illegal activity. I mean, how stupid can someone be? Waititu was elected with a landslide win, only for him to squander that goodwill. Kwani Ako na Panya kwa kichwa?

We live in a country where retarded Government officials have made it their core-business to undermine indigenous investors and boot-lick foreigners who offer the same or even more inferior products and services. This is a product of the retrogressive 8-4-4 system, championed by brainless educationists like Julia Ojiambo and moronic religious leaders like Ndingi Mwana Nzeki.

Instead of rounding up all manufacturers of local brews and involving them in seminars, clinics, workshops for capacity building, branding, value addition, marketing and export-assistance, the best the Government can do is dispatch D(minus) police officers to arrest the same outfits that they have licensed.

This is what that CS for Industrialization, that fuckin Cushite Adan Mohammed with his fake British accent should be doing. But the guy talks like the sun shines up his ass because he’s a product of expatriate conditioning, having worked for long at Barclays. Such nincompoops normally frown at local investors, because of having their tongues inside muzungu’s anals.

I think one of the primary requirements to work in Government is a possession of inherent stupidity, and in large quantities; preferably infinite. The Kenya Institute of Administration plus all other institutions which train civil servants including the Police, must have a specific course on “Stupidity” because Government workers are such morons!

Instead of boosting capacity of local manufacturers so that they can turn into exporters and earn the country foreign exchange, County and National Governments and relevant bodies like KRA only know the language of frustrating local investors, while elevating foreigners.

This endemic Self-hate syndrome is largely prevalent in Government offices and corridors of power, where dumb occupants of those offices always want to frustrate locals who seem to be doing better than them, so that they can compensate and justify their own inadequacies. For instance, a D(minus) police officer feels great when harassing Miguna Miguna because he’s been conditioned by the system to treat those better than him with contempt.

On one hand we have Government officials undermining legitimate enterprise, and on the other hand, we have religious leaders projecting their “work” as an income generating activity.

For instance, we recently had #SonkoTheChokoraa provide a land-rate exemption to churches. Why the hell would he do that? For instance, Holy Family Basilica is located right opposite the InterContinental Hotel. Basilica only employs guards and window cleaners while InterCon employs hundreds of Kenyans on a permanent basis. Had InterCon gotten that tax-holiday, they’d have probably employed 100 more Kenyans. 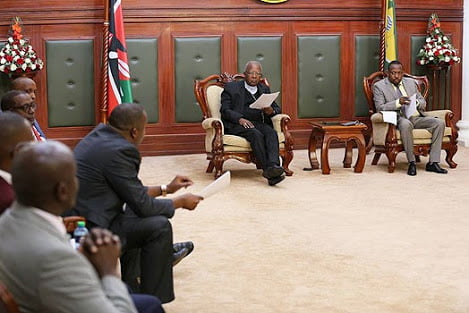 CAPTION: Nairobi Governor Mike Sonko with Cardinal John Njue when he was waiving land rates for religious institutions. Instead of easing business for legitimate enterprises which create jobs, he is pandering to religion which adds no value to the economy.

Which is what Dubai does to attract investors. They give tax concessions to enterprises, not fuckin churches! Sonko is pandering to the churches, as if they’re the custodians of our votes. Trying to be another Ruto and his fake religious posturing. We don’t buy that crap!

Then when churches ran out of members, they conspire with Government officials to crack-down on the alcohol and entertainment spots, under the illusion that once those spots are closed, we will find our way to church, tithe and enrich the greedy clergy. Real motherfuckers! That’s why their favorite past-time is ranting against alcohol, bars disco’s, forgetting that taxes raised from this sector, is what funds roads, hospitals and the likes.

For the record, even if all bars were shut down in Kenya, we still won’t attend church! There’ll be many more sleeping in their houses because you can’t force your shit on Wananchi.

Yet the same churches don’t pay taxes, but want to dictate how taxes should be spent. Rubbish! Church leaders should have no role in Governance and their opinions should not be aired outside the Sunday pulpit sermons. They’re the ones which have sowed seeds of discord by for instance, giving Ruto and his dick-suckers a platform to politic on Sundays, like when recently Sonko was talking about Mt. Kenya politics. It was all going down in church. 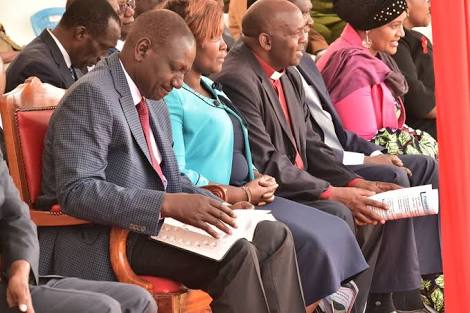 CAPTION: Churches have provided a platform for William Ruto to spew hate and political rhetoric, constantly putting the country on campaign-mode. That’s why churches should be called out for their toxic role in cementing hate in the country.

Surely, can this country be on campaign-mode year-in, year-out? William Ruto and your fuckin pastors, save us from your trash! Seeing you on TV makes some of us nauseous. You’re that repulsive. Find something better to do with your life on Sundays other than attending church to spread cheap politics and hate.

The point was that Keroche’s Tabitha Karanja is no stranger to wars, as she has had to overcome all the above artificial barriers, to become a formidable force in the manufacturing sector. Which is why this incident of Anerlisa’s debts, has left her unfazed. But then again, this is Nyakundi we are talking about. Someone who’s brought down the high and mighty. Who will “win” ? Only time will tell.

Moving on, it seems the vehicle which had been handed to Dennis Mombo/Wananchi Credit Limited as surety, was acquired on loan through Equity Bank. It may explain why perhaps Anerlisa was not in a position to borrow from banks, because probably they owe a lot to them too. 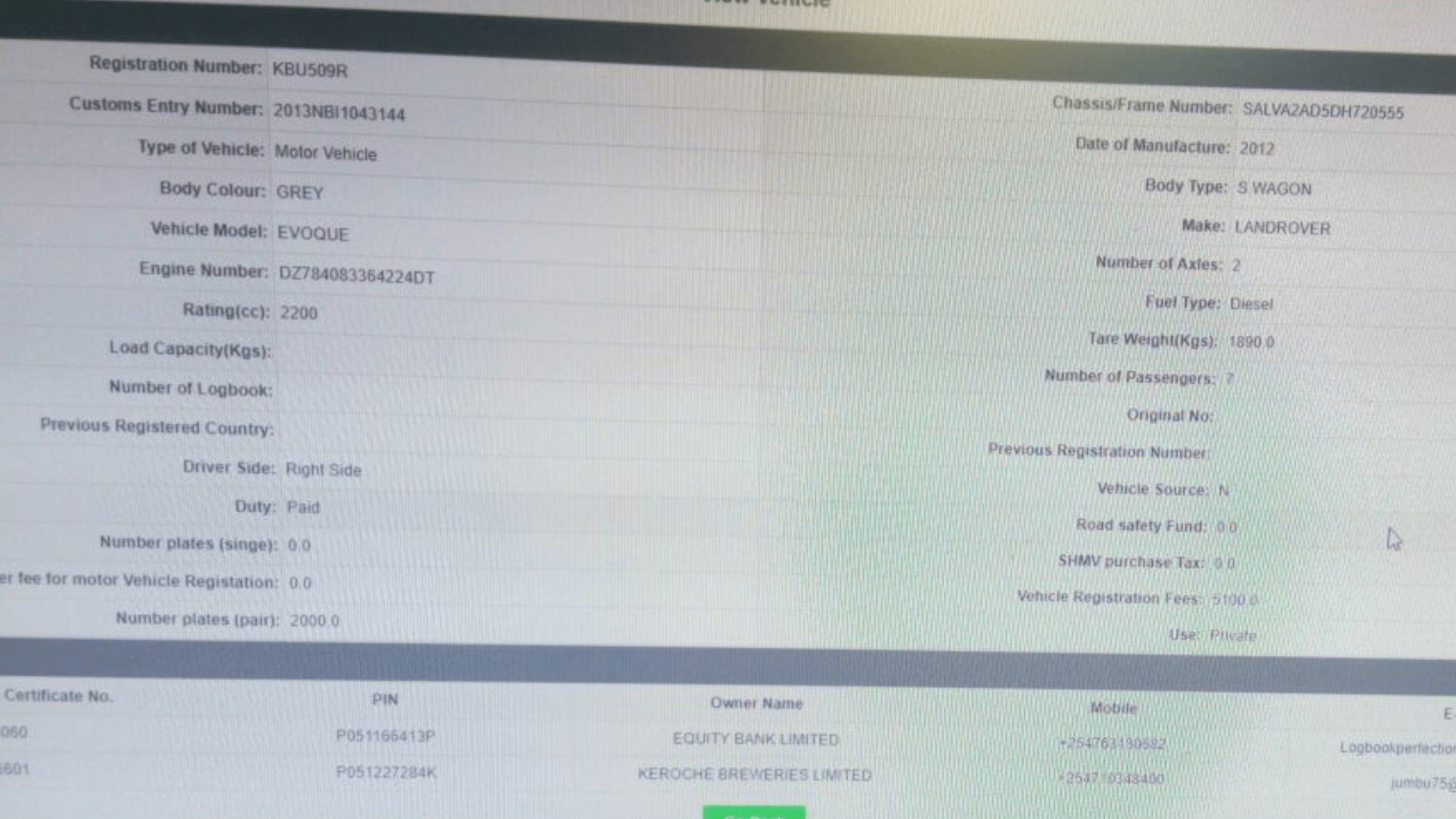 CAPTION: The details of the Range Rover Evoque owned by Anerlisa’s mother.

It’s the same case with politicians. Since many of them are listed at the Credit Reference Bureau (CRB) because of issuing bouncing cheques, they depend on shylocks for soft-loans. In her heydays, former 2nd Lady Mary Wambui was said to have been the official parliamentary shylock, loaning MPigs money, since she was very liquid back in the day.

In our continuing serialization, we will provide all the documents that Anerlisa signed for her loan, and bank transfers. 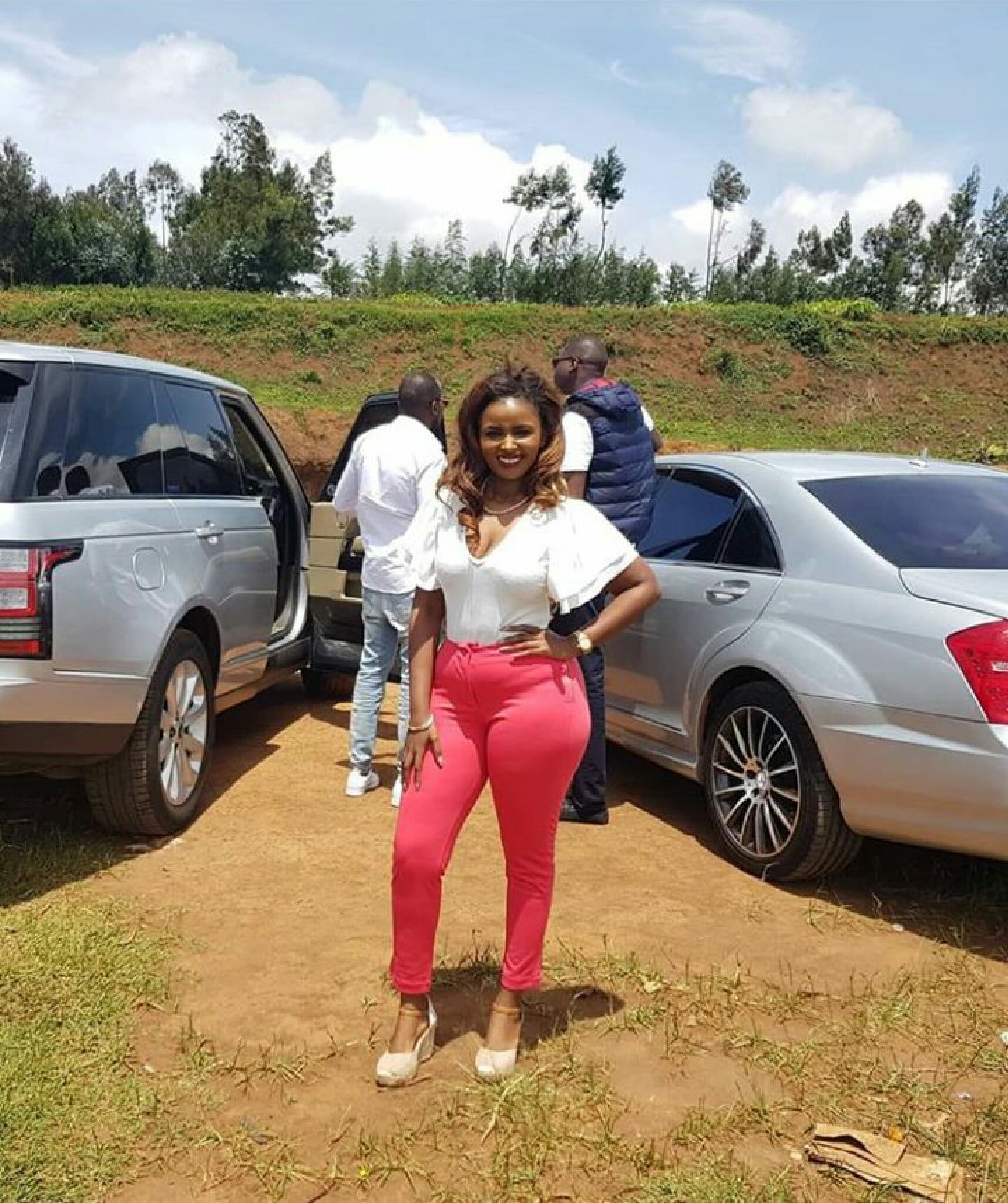 CAPTION: Anerlisa and her boyfriend at some event in their usual flashy nature.