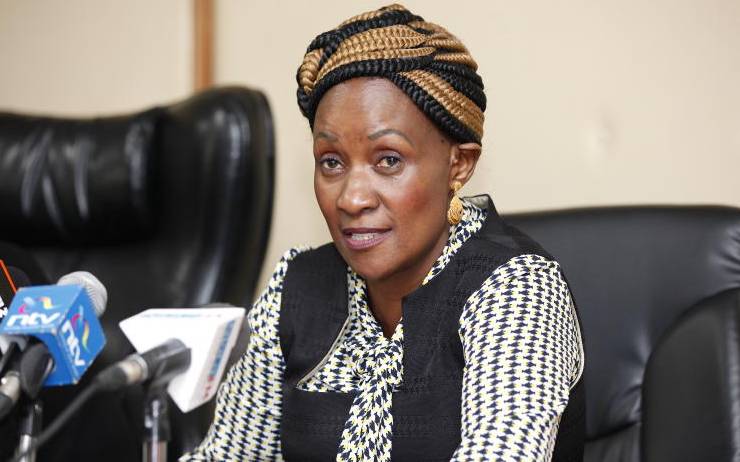 A lot has been said about chain smoker Nancy Macharia but I’ll not focus on that today. Apart from people that complain about her chain-smoking habit and billowing smoke that is the nature of her office, I’ll focus on corruption and impunity, the biggest cancers in all the sectors of the Kenyan economy.

Before I proceed, let me talk about corruption

For corruption to exist 2 things must be present:

1) A Government: Corruption, like a virus cannot exist outside a host. If all the laws in the land were suspended today corruption would cease to exist. There is no such thing as corruption in a free market. Any corruption that takes place in the private sector is motivated by a desire to skirt some form of regulation. In a free market, you can’t bribe someone to buy your product. Governments are necessary evils. We need them, yes but to keep them honest, we must limit their size and scope.

2) Human greed. Greed is a universal human endeavour — It is not specific to Jubilee or Kenya or Nigeria. You cannot do away with greed any more than you can do away with anger or fear or lust. Human greed is not exclusive to learned or unlearned. Your average PHD professor has the same propensity for greed as a form 4 graduate. No more no less.

So since both requirements for corruption (governments and human greed) are common to almost all nations, why is it we do not find corruption ravaging all countries in equal measure? Because it has to do with the size of the Governments, not the people who run them.

The bigger more convoluted the structure, the more corruption you get.

It’s impossible to create new laws without increasing the demand for corruption. Say for example you create a law that states anyone who murders somebody goes to jail. This is a good and necessary law. But by creating it you automatically create an opportunity for a guilty suspect to bribe their way out of trouble and you also create an opportunity for a greedy policeman to extort the innocent suspect.

This is not to say that laws are bad, they are not. But they do have an economic side effect which can lead to chaos if not mitigated. Laws and regulations are necessary but must be kept to an absolute minimum if they are to produce net positive results.

As Milton Friedman, the Nobel prize-winning Economist pointed out, countries that have managed to control corruption have only managed to do so by rolling back regulation. The UK, once the most corrupt nation on earth, is a classic case in point:

The basic function of a state is to maintain law and order. Not to buy laptops for our kids as great as that may be or build stadiums as President Uhuru Kenyatta lied to Kenyan youth that he would do. Neither is it their role to tell its citizens whom they should marry. Why should the government regulate marriages when churches have been doing a far better job for centuries? Don’t we only create a need for ministerial departments and seminars, and trip and salaries and endless tenders of waste and gluttony?

Our Government does not need Ksh2 trillion to do that. Come 2022 voters should be looking at a political party that will reduce government spending not increase it. The only way to reduce spending is to cut the functions and therefore the size of the Government. Why do we need a ministry of sports, or gender or education or housing, or industry? These are simply avenues for corruption. The functions can be adequately overseen by the private sector, many of who do massive work in other countries including building roads, railways, etc. Why should we have Uhuru promising to build stadiums? Have you ever heard Obama or Cameron building stadiums in their countries? That’s the work of the private sectors; clubs, corporates, federations, etc.

The greatest accumulation of wealth and well-being the world has ever known was created in only 100 years in the US almost entirely by the private sector. This is the only model that works, private enterprise based on individual effort and freedom guaranteed and protected by State. The only role of the state is to protect these freedoms.

Kenyans need to think about critically about how many laws we actually need and how many ministries we need. If there was no youth ministry where could NYS scandal have come from? Even if today CORD takes over power within the same structure of Government, corruption will continue to thrive because we will just be switching thieves. There is no way you can leave your wife or daughter at your friend’s house, go on a long business trip and expect to come back and find her untouched. Similarly, there is no way you can give Anne Waiguru or ODM’s Millie Odhiambo the password to the IFMIS program that controls Government procurement and expects them not to steal. It’s impossible.

Beleaguered Teachers Service Commission CEO Nancy Macharia was initially a hands-down favourite in the way she was running the commission till she suddenly changed and became a monster.

From today, this blog will serialize various corruption scandals masterminded by Nancy Macharia as we demand her arrest.

This site can also reveal that the National Intelligence Service has in many occasions sent dossiers to the relevant authorities pertaining to Nancy Macharia’s corruption scandals but nothing is yet to be done.

It also emerged by leveraging on her position as the CEO, Nancy Macharia the chain smoker has been forestalling investigation into several high-profile corruption cases without any substantive reason.

A few days ago, after I announced that I would start exposing corruption at the Teachers Service Commission, Nancy Macharia sent some lightweight keyboard flies to threaten and bully me into silence, despite the fact that this site always backs up everything we post.

Nancy Macharia has hired lightweight keyboard flies to attack this site, without any evidence despite the fact that we back up all our claims

Nancy Macharia Led Teachers Service Commission in the tender for provision of medical insurance service for commissioners and secretariat staff TENDER NO. TSC/T/039/2019-2020 is a case study of corruption, manipulation and Impunity.

Whereas, the Insurance Regulatory Authority prescribes a minimum paid up capital base requirements for licensing of insurance companies that wish to transact General insurance under which Medical insurance falls, as Ksh.300 Million and Ksh.150 Million for Life insurance, for this tender TSC has asked for a paid up capital of at least 1BILLION AND ABOVE!! (Refer to appendix to instructions to tenderers, ref: 2.20 mandatory requirements, page 18, item no.21)

This tender is therefore mischievously crafted to favor a specific underwriter among the 5 who meet this outrageous requirement thus locking out many other potential participants! Why so? Obviously Money exchanging hands.

The effect of this is that;

1. By locking out many other potential participants, this does not allow for completion which would give government best value for money. The few qualifying based on this outrageous requirement could also collude to fix a price thus TSC ending up paying unnecessarily more than if completion was allowed!

2. This undermines section 2:2:7 of the constitution and the president’s efforts to fight corruption

3. Government Agencies not reading from the same script! For indeed, the insurance regulator states one thing and TSC contradicts! Thus, leaving a bad taste in the investors of this sector!