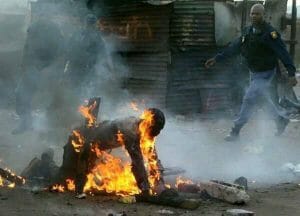 After his mother was raped, and then murdered along with his father, sobbing 12-year-old Amaro was gagged and drowned in scalding bathwater. And that’s how the youngest member of the Viana family became a statistic: another in a long line of white South African victims of black violence.

It’s an understatement to say that such crimes have a racial component, yet the government run by the African National Congress – Nelson Mandela’s party – denies even that. It claims that whites are more likely to be victimized in South Africa, one of the world’s most crime-ridden nations, only because they’re wealthier. And this surely is a factor. Yet it doesn’t explain the white car-jacking victim tied behind his vehicle and dragged until his face was completely scraped off.

Or the young child bludgeoned to death after his parents were murdered.

Or the two-year-old baby thrown into boiling oil.

Or the countless other cases of black-on-white rape, torture and mutilation, incidents clearly driven by more than just greed.

If that sounds to you like it’s knocking on genocide’s door, you’re not alone. The respected organization Genocide Watch places white South Africans in the sixth stage of the genocidal process.

There are only seven stages, by the way, with the last — and next for SA whites — being extermination.

If you’re shocked that you haven’t heard anything about this, don’t be. It’s even less politically correct to talk about the extermination of whites than that of Christians, who are currently persecuted in many Muslim lands. The SA police often aren’t interested in investigating crimes against whites (especially since they perpetrate some of them), and the Western media were only concerned about reporting on SA whites when they could be demonized. And the press certainly won’t find its honest pen now, in the midst of its effort to beatify the recently deceased Nelson Mandela. This brings me to my main point.

Mandela, Great Man of Peace, never had much to say about the impending genocide of whites (well, he did have one thing to say, but I’ll get to that).

Once again, this is the president of the country — and just watch this video and note the feeling with which he sings the song.

Then there’s former head of the African National Congress Youth League Julius Malema. While he’s now an ardent foe of Zuma and wants the SA presidency himself, they certainly are of one mind on musical matters: here is a video of Malema disgorging his rendition of “Kill the Boer.” And I don’t remember Mandela, Great Man of Peace, ever making a statement about how singing a genocidal song probably isn’t a prescription for racial unity.

This isn’t to say Mandela belongs in even remotely the same category as Zuma or Malema. Not at all.

Mandela didn’t exhibit nearly the same passion when he sang a song about killing whites.

Some may point out that Mandela could rock the boat only so much, as some in SA already criticized him for being far too conciliatory toward SA whites — a sellout. Yet if this is why he turned a blind eye to a genocidal movement, and even paid some lip service to it, he sold out the principles of racial harmony and egalitarianism the Western world has ascribed to him. Is this the stuff of which great men are made?

And that’s the point. Mandela isn’t praised as merely someone who had a few admirable qualities, which would be justifiable. After all, it isn’t everyone who could spend 27 years in prison and emerge with a message of forgiveness. He is, rather, becoming what Napoleon considered a foundational building block of history: an “agreed upon myth.”

But the man was always far different from the myth. Mandela founded the armed wing of the ANC, known as Umkhonto we Sizwe. And while current reportage often implies that the US’s branding him a terrorist in the 1980s was a national disgrace, the truth is that the Great Man of Peace was a terrorist. In fact, the SA government offered to release him from prison in 1985 if only he’d renounce violence. He refused to do so

Of course, Mandela could have just agreed and then resumed his militancy once freed, and that he instead stood on principle is praiseworthy. Moreover, there are things worth fighting for, dying for and, even, being violent for. But what was Mandela’s cause?

While Mandela denied being a communist during his terrorism trial, it’s now known that he was allied with the Communist Party of South Africa. He was supported by Fidel Castro, and the ANC and its Umkhonto we Sizwe received financial support from the Soviet Union. Rounding out his leftist credentials, Mandela also advocated abortion and faux marriage.

Not surprisingly, his ANC used communist-level violence. Mandela admitted that the organization would regularly use torture on suspected “enemy agents,” with most of its victims during the Apartheid era being fellow blacks. Poor laborers were killed in bombings, and Zulus associated with the Inkatha Freedom Party were sometimes dispatched by “necklacing,” which is when a tire is filled with fuel, placed around a victim’s neck and set alight. Mind you, this “technique” was endorsed by Mandela’s wife at the time, Winnie.

Of course, Mandela didn’t seek to purge whites from SA upon becoming president. What he did do, however, was take this racial minority — which had willingly relinquished political power — and initiate the process of stripping them of economic opportunity via anti-white racial quotas. The result is that poverty exploded among Afrikaners, and, with jobs often denied them, it is said that hundreds of thousands of whites now live in squatter camps. Mandela, true to form, had nothing to say about this.

And this spirit of persecution is intensifying. As Genocide Watch put it, writes the Daily Mail, “[T]he murders of ‘Afrikaner farmers and other whites is organised by racist communists determined to drive whites out of South Africa, nationalise farms and mines, and bring on all the horrors of a communist state.'” And Malema is forming a new political party with the expressed purpose of “fighting white males.” You see, whites are South Africa’s “Bush” — everything is their fault. Mandela and his cohorts hobbled the country with a corrupt government and listing economy, but whites’ economic activity is to blame. So their property must be expropriated. They must be taken down a notch. Then the ANC will arrive in the Promised Land.

The best thing I can say about Nelson Mandela is that he wasn’t Jacob Zuma or Julius Malema. And maybe he delayed the inevitable. But the inevitable is that whites will be purged from SA, with the only question being how many will escape before that final stage and final solution. Whatever the details, at least this time Mandela will have a good excuse for saying nothing.

The Africans who are watching as Whites are being killed will cry when they are done with the White , They will be next. Time will Tell .

Would you like to get published on this Popular Blog? You can now email Cyprian Nyakundi any breaking news, Exposes, story ideas, human interest articles or interesting videos on: [email protected]om. Videos and pictures can be sent to +254 710 280 973 on WhatsApp, Signal and Telegram.