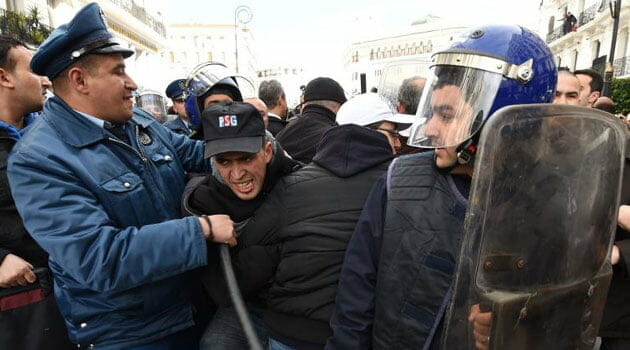 Forty police officers were wounded in clashes with demonstrators opposed to shale gas exploration in the Algerian Sahara, the Interior Ministry announced.
“The town of In-Salah saw incidents involving public order, initiated by a group of young people protesting against shale gas operations in the region,” the ministry said in a statement.

It said the clashes “caused injuries to 40 police officers, including two who were seriously injured.”

Protesters set fire to the local government offices of In-Salah district and the residence of the district chief, as well as part of a police dormitory and a police truck.

The security forces managed to “take control of the situation and bring calm to the city,” the statement said.

Anti-shale gas demonstrations have increased in the cities of the Algerian Sahara since late December, when Algerian oil company Sonatrach announced it had successfully completed its first pilot drilling in the In-Salah region.

Sonatrach announced in early February that its exploratory drilling for shale gas using hydraulic fracturing would continue despite mounting hostility among people living nearby.

Continuous demonstrations were held for two months at In-Salah, the town closest to the drilling sites.

Algeria has seen massive investment in shale gas to compensate for declining oil revenues, but faces opposition from people living near the fields, concerned about the impact on the environment.

According to international studies, Algeria has the fourth biggest recoverable reserves of shale gas globally, after the United States, China and Argentina.