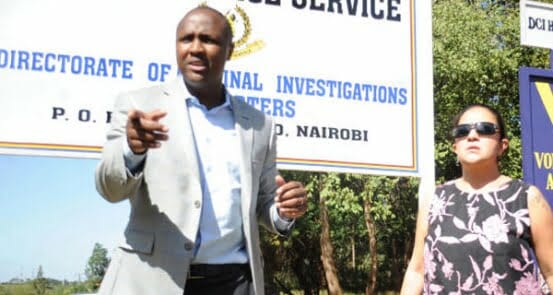 Is Keter planning to marry this nominated MP ? Well, this happens after #MyBukusu Darling broke up with her Luhya husband citing mistreatment .Here is the story

There is more than meets the eye in the Gilgil Weighbridge melodrama where outspoken Nandi Hills MP Alfred Keter and URP nominated MP Kaur Birdi unsuccessfully invoked Uhuru Kenyatta’s name to have a vehicle unconditionally released.
Even as the two MPs are still under investigations from various government agencies, the big question is why she picked on Keter to help her sort out the matter rather than reaching out to more senior operatives and even colleagues from the URP side. The answer: It is alleged that the two could be in a secret relationship.
Sources say Kaur is single and at one time during an interview when asked if she was dating and planning to marry, she replied: “There is no one. I believe that people should control what they can as individuals. What you can’t, leave it. You don’t need to force it. If someday life brings along a man who is well balanced, somebody who can understand me, then I will have a family of my own. At the moment I am happy with my parents, brother and two sisters.”
She joined politics through URP but it is not clear why she chose URP and not any other party. According to URP sources, some top URP members reached out to her during the early campaign period to bankroll William Ruto’s presidential campaigns.
Those who brought her on board had information she has powerful connections among the Asian community. The idea was to use her Asian links to be exploited by URP team. Sources say she was promised nomination slot as soon as she accepted to bring on board wealthy Asian tycoons.
It is the same team that influenced her to run for a parliamentary seat in Nairobi and they even identified Makadara constituency. She was later to be issued with direct URP ticket, campaigned a bit but withdrew from the race to support the TNA candidate Benson Mutura who eventually won the seat.
She was later to be nominated by URP thereby becoming the first Asian woman to be nominated to parliament. In November 2013, Birdi hosted dinner for Ruto at the Laico Regency in Nairobi.
Asked why she hosted the Sunday dinner, Birdi said: “I would like to acknowledge and thank the deputy president and the government of Kenya for nominating me the first Kenyan woman of Asian extraction to Parliament”. In attendance were majority leader Aden Duale, nominated MP Johnson Sakaja and entrepreneur Vimal Shah.
Birdi attended her primary and secondary schools in Loreto Convent and Our Lady of Mercy School. She went for further education obtaining her MBA degree from Sheffield Hallam University.
When she came back to Kenya, Birdi wanted to start a newspaper but ended up working for Radio Africa’s East FM between 1998 and 2005. She went into politics in 2012 but continued working in the family business, Turn-O-Metal Engineers Ltd, a drilling company on Lunga Lunga Road in Industrial Area, Nairobi.
On the weighbridge saga, she posted on her facebook: “Good morning all. As you may be aware, there are allegations against me and Hon Keter about the weighbridge issue. I would like to thank you for all your calls, texts whatsapp etc. I assure you I shall release my statement to you once I have cleared my name with the relevant authorities. Asante sana”. Strangely, she has never released the statement.