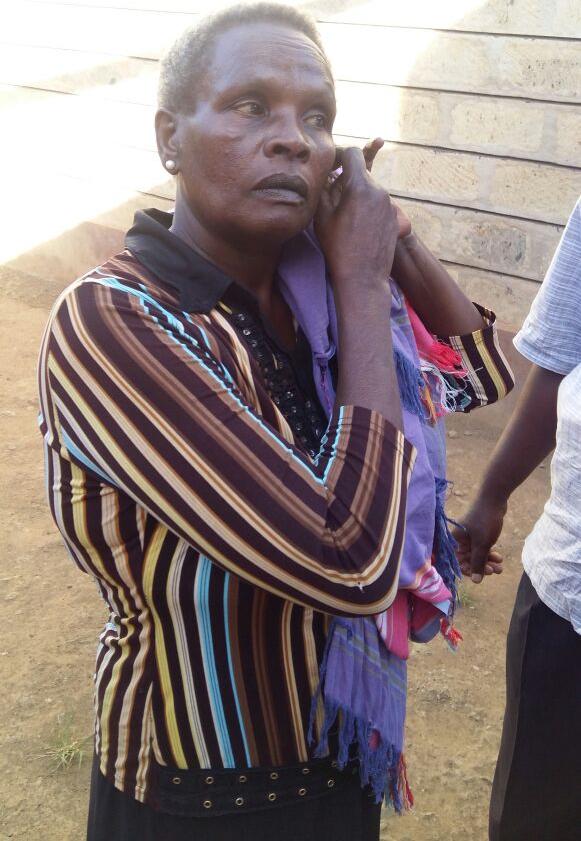 Albert Mokono Ondieki is a practising Kenyan lawyer, who shot to the limelight after submitting a petition to have former Ethics and Anti Corruption Chair Philip Kinisu sacked last year. Despite posturing as a clean man, Ondieki who is a brother to Kisii County Assembly Speaker Kerosi Samwel Ondieki, is behind an intricate Web of land-fraud in the country.

CAPTION: The Law Society of Kenya has licensed this thief to continue Defrauding Kenyans, whilst masquerading as a genuine lawyer.

The scheme involves a cartel which scours newspapers and mainstream media, looking for targets and susceptible individuals to extort.

They initially pose as kin to an old lady, pretending to be ailing and on her death-bed, and her “sons” are the ones who reach out to people, interesting them in their fictitious parcel of land, for which they wish to offload for the purposes of settling medical bills.

Indeed, unsuspecting victims of the fraud are normally led to Nancy’s fictitious residence in Juja’s Nyashava area, where she would act out a scene straight from the movies, pretending to be sick and desperate to sell her inherited parcel of land. It’s a script any humane person would fall for.

CAPTION: Nancy Wanjiku who works as a proxy-thief of lawyer Albert Ondieki after she was arrested last week.

Indeed, the lady in question Nancy Wanjiku was arrested last week, after a trail of evidence led investigators to Murera in Ruiru, Kiambu County, where she had been hiding.

The scheme is an elaborate scheme which can only be thought out by a lawyer of Albert Ondieki’s calibre, who surprisingly is still registered as “active” by the Law Society of Kenya. Instead of LSK defending the rights of Kenyans, and portraying Kenya as the bastion of constitutional rights, they are helping entrench rot in the legal fraternity by not inducting and filing charges against rotten eggs like Albert Ondieki, who are bringing their profession to disrepute.

The young men who were posturing as “sons” to the woman behind the scam, whom we have come to discover are decoys assembled by lawyer Albert Ondieki, are still at large, after Police launched a manhunt for them. They have since changed their telephone lines and gone underground.

So how does Albert Ondieki control the entire operation?

Well transactions of such a nature require lawyers to act on behalf of clients due to the huge sums of money. Albert Ondieki was “appointed” by Nancy Wanjiku currently in custody, to be the transaction lawyer. His address was listed as M/s Mokono Ondieki & Co., Advocates, Pioneer House, 5th Floor, Suite 505 P.O.Box 7947-00100, Nairobi.

CAPTION: Part of the documents which formed the agreement to sell the fictitious parcel of land, where Albert Ondieki was the lawyer acting on behalf of the con-woman.

To ensure that the scheme is executed to perfection, Albert Ondieki is on the grid with the Ministry of Lands, where members of his community are said to control cartels within. Through his insider contacts, he has been able to get LR Numbers which are genuine and can emerge positive from any initial search.

But the land in question is normally owned by someone else, as the documents and identity of the fraudster and proxy to Albert Ondieki are normally forged to replicate the owners true identity. It’s only when reaching the last phase of land acquisition that reality will dawn on an unsuspecting buyer, that he has been duped by this crooked lawyer.

Meanwhile Albert Ondieki together with his proxy-thieves constantly exert pressure on unsuspecting victims to wire the money to his bank account 00240290500985, Equity Bank Fourways Towers Branch.

What is so suspicious about this particular branch?

Well you will recently remember the eruption of a scandal involving the Ministry of Health, where briefcase companies were awarded tenders to the tune of Kshs. 5 Billion, including members of the Kenyatta Family. One of the companies awarded a tender worth Kshs. 889 Million is Estama Investments Limited owned by Equity Bank Fourways Branch Manager Ambrose Makanga.

CAPTION: Equity Branch Fourways Branch seems to be a haven for corruption and money-laundering.

It was thus surprising that upon the receipt of the monies, investigators discovered that the lawyer Albert Ondieki withdrew the money in cash, allowed to do that by the branch manager who was getting a 10% commission to facilitate the money-laundering scheme, identical to Josephine Kabura’s and Anne Waiguru’s NYS heist.

In the most recent scam, Albert Ondieki a lawyer licensed by the LSK to steal clients money, has made away with Kshs. 5.5 Million, yet the Law Society of Kenya has refused to make any effort to have him refund the monies. They have equally allowed him to continue fleecing unsuspecting Kenyans, despite mounting evidence and paper-trail in their possession on his criminal activities.

CAPTION: Some of the transfer forms (RTGS) where money was wired directly to Albert Ondieki’s account at Equity Bank.

This has been the slow rotting process of the LSK since Apollo Mboya left. It has become toothless and unable to enforce it’s own code of conduct to its errant members.

The lawyer Albert Ondieki is still at large and we are calling upon the police and the office of Director of Public Prosecutions Keriako Tobiko to move with speed, and make him an example to crooked lawyers out there, who have made it their core-business to abuse the trust of Kenyans, and use their intellect to defraud.

Don’t forget to open the link below and see the con-woman acting under the direction of Albert Ondieki, being arraigned in court.