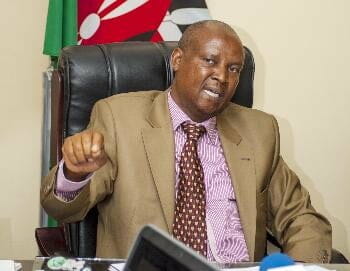 Nakuru governor Kinuthia Mbugua has asked people intending to see him in his office to understand that at times, it is impossible for him to do so due to pressure of work and their large turnout.
He said the residents’ needs were many and overwhelming yet governing a county of over two million people makes visitors to his office a necessity but very large in number.
Speaking at Nakuru’s Kiamaina Secondary School in Bahati constituency, the governor said taken on average of one person visiting Nakuru town to consult him from each ward in the county on a daily basis, the minimum number is 55 as that is the number of the county wards, he said.
“On average, between 50 and 100 people flock my office daily and on top of that, we have to visit one ward every week as it’s our duty to meet people and understand their needs and concerns,” Kinuthia said.
The governor said he will always prioritise seeing visitors from far apart in the county “as I feel it is not right not to see them yet they have come from far and have spent their hard-earned meagre cash in the course of travel,” he said.
Meanwhile, Kinuthia called on Uhuru Kenyatta not to assent to “bad laws” enacted by MPs saying legislators should not pass laws that are not in tandem with the aspirations of Kenyans.
“We respect our president and our country and we ask him not to append his signature on wayward laws that are misleading,” he said.
The governor was referring to the amended Order of Precedence Bill approved by legislators recently that bars the country governors from using the title ‘His Excellency’, spouse as ‘First Lady’ and reps from being referred to as ‘honourable’.
He accused the lawmakers of engaging in trivial matters arguing there are more crucial national and county issues that needed their attention and energies.

In this article:Nakuru County Politics