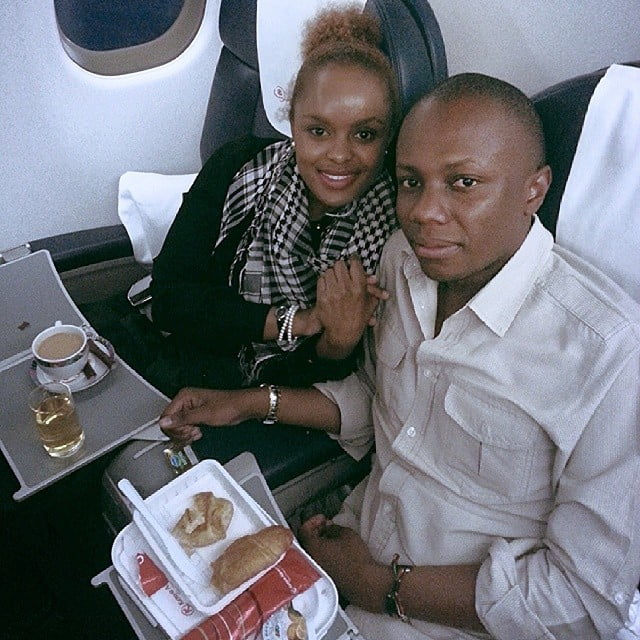 CAPTION: Avril pictured here with the South African dude, who dumped her via Instagram.

Overrated but underwhelming musician “Avril” now claims that Kenyan men don’t have good game, weeks after unveiling her “fake” bulging stomach, indicating that another prominent single-mother is due.

Like your typical blonde bimbo, Avril was sucked into the Nairobi life, where she (like every other misguided woman) was looking for a man to resolve all her issues.

Avril was dumped on social-media by some supposedly “rich” South African guy, who posted a photo on his Instagram page with another woman, on the same date as Avril’s birthday. The basic bitch was also once linked to Tanzanian street-urchin turned musician Diamond Platinumz, where she once played video-vixen in a shoot.

Typical of Nairobi bitches, Avril will land on some penis and get pregnant, with no sign of a baby-daddy.

Meanwhile the producers of “Wedding Show” are swamped with request for couples, who would like their nuptials to be covered. The recent TV show on Maisha Magic by MNET asking for couples to be nominated, was oversubscribed.

On Facebook, Instagram, photos of weddings are in the thousands, meaning that it’s only a small percentage of misguided women, whose transgressions and poor choices are taking a lion’s share of media coverage.

Avril once sung a song “Chokoza” with another misguided rat called Marya, where they encouraged girls to be lesbian and to extort men for drinks and bail out. The duo inculcated the current craze in Nairobi, where bitches go out with the expectation of free alcohol and offering no sexual recompense in return. Men should therefore desist from buying women booze, because these women employ flirting tactics to create the impression that they will offer sex in return, yet it’s all an elaboration extortion-scheme.

Now if a woman is looking for the “ideal” man who will waste his money paying for holidays and expensive gifts for her to floss with on social-media, and all she has to offer is her looks, then unfortunately that doesn’t cut it anymore. Age is the biggest enemy of a woman, and with time, any right-thinking man will exit any arrangement not based on friendship and love.

Ask Caroline Mutoko; for the longest, she sucked Patrick Quarcoo’s dick, thinking that she was the epitome of immortality as far as women ageing genes is concerned. But she has been edged out by curvy Grace Msalame for Patrick’s attention, and now has to contend with the reality that her moment of glory is coming to a screeching halt.

Avril should not be allowed to poison young girls minds on the supposed inadequacies of Kenyan men, because her poor choices don’t necessarily reflect on the general women population.

Your struggling music career prospects aren’t exactly the reference guide to meet and interact with decent men, so it shouldn’t be used as the SI Unit to make blanket-condemnation on us.

You’re now probably going to be a hopelessly-pathetic single mother Avril. You probably wanted to trap someone using pregnancy, someone who is married and well-to-do. Well all your efforts were an exercise in futility, as you will be stuck as a single mother who will forever be texting different men for MPESA support in-order to sustain your delusional lifestyle.

Believe it or now, there are more married women than single-mothers in the country. There are more people who frequent churches than bars. It’s just that your misguided lot get the lions-share of the publicity, unfortunately trying to drag fellow women down your highway to destruction.

Look at all the single mothers in Kenya; it’s not that they didn’t have men who wanted to wife them. They simply made a conscious decision to spread their legs with ill-intention, and were left with the reality that looks and sex cannot keep a man.

My advise to you Avril is to look for a married man (sponsor) to help you pay your bills, like your fellow single-mothers. Stop tainting the brains of younger women with your toxic reasoning. 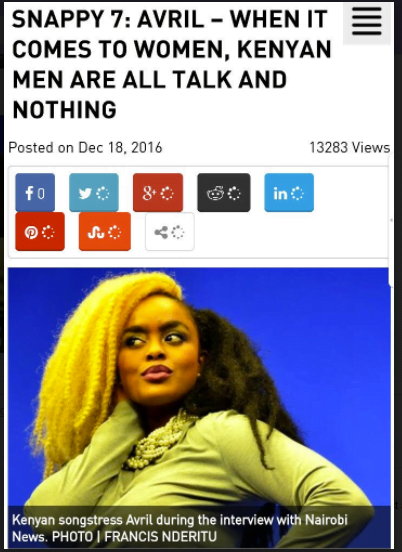