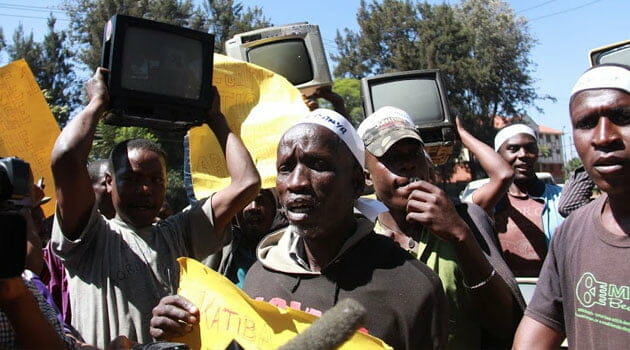 Anti riot police officers on Friday dispersed a group of demonstrators who had gone to protest at the Communications Authority of Kenya (CA) headquarters on Waiyaki Way against the digital migration initiative.
The group that was carrying old model television sets and live chicken chanted slogans at the headquarters which was surrounded by anti-riot police officers.

“They have eaten chicken…we have right to watch television,” they could be heard saying.

One of the activists leading the demonstrators, John Magata, urged the government to resolve the matter fast while warning of a major protest next on Friday if nothing is done.

“It seems only the rich will be watching television in this country. Ninety percent of Kenyans cannot afford to pay for a monthly fee to watch television,” he complained.

“We want the president to address these challenges because we don’t want the current situation to persist.”

The demonstrators were demanding answers on why three local TV stations continue to be off air two weeks after the government switched off their analogue systems.

“They have eaten ‘chicken’ that’s why the three media houses have been switched off,” he claimed.

Communications Authority of Kenya (CA) Director General Francis Wangusi insists the three media houses have no choice but to comply with the government directive of moving from their analogue platforms.

On Thursday, Wangusi stated that the authority will issue a second notice to three media houses to go back to the TV digital platform, failure to which they risk losing their licenses.

He said CA will soon issue a deadline by when media houses should to go back to the TV digital platform before action is taken.

He maintains that the authority will not issue a third Broadcast Signal Distribution (BSD) license.

“The investors that we licensed in this country followed the procedure and we have licensed two of them. If they believe that we must give them their own in order for them to be able to roll out, those monopolistic tendencies we are not going to agree,” he said.

African Digital Network (ADN), a consortium of Nation Media Group, Royal Media Services and The Standard Group has been fighting to the get the licence which has only been issued to the State-owned broadcaster Signet and Chinese firm Pan African Network Group (PANG).