The financiers of the Dusit D2 Complex in January 2019 are among the criminals whose assets were frozen by the Kenyan government on Wednesday.

“Terrorism knows no bounds. We shall neither surrender into the hands of terrorism nor play into the narrative propounded by terrorists,” CS Matiangi said.

The no nonsense CS said destroying the facilitation networks terrorists rely on is the only way we are going the neutralize their efforts to disrupt way of life.

Mohamed Abdi was presented in a Nairobi court, four months after the attack where 20 people lost their lives.
He was charged with seven counts of providing property for the commission of a terrorist attack.
It was found that Abdi sent Sh500,000 from Soko Mbuzi in Mandera to the main attacker Ali Salim Gichinge using different phone numbers. 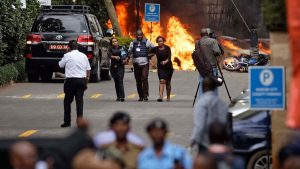 Halima Adan Ali is frequent in Nairobi and Mombasa courts on terrorism charges since her first arrest in Machakos in April 2015.

The other three co-accused have also been linked to the Westgate Mall attack in 2013 and Garissa University attack in 2015 that left 165 students dead.

America has also listed Halima Ali among other seven individuals in the world who finance the Islamic State in Iraq and Syria (Isis).

“Ali was designated for assisting in, sponsoring, or providing financial, material, or technological support for, or financial or other services to, or in support of, ISIS,” the statement read in part.

The US said that she had been sent up to Sh15 million from various countries around the world within the past two years.

Kenya police designated Ali as an extremist recruiter and facilitator of the infamous “Alshababes” which was uncovered by security agencies.

She was sanctioned eight months after the US sanctioned her associate Waleed Ahmed Zein, who is also in Matiangi’s list.

The US described Zein as “a dangerous terrorist with an intricate global network of financial facilitators for Isis. She is also using intermediaries to evade police and fund deadly attacks.

Zein moved over Sh15 million in 2017 and 2018 that ended up supporting Isis operations in Europe, the Middle East, the Americas and East Africa.

In July 2017, Kenyan police arrested the two on the grounds that they financing terrorism activities in the Kenya.

Abdi Ali and Nuseiba Haji and Mohammed Abdi Ali were arrested in May 2016 and the police accused them of planning a large scale bio-attack (anthrax attack) in Kenya.

Police accused Hassan other suspects of planning to attack targeted the Supreme Court and other other state offices in Nairobi following a series of foiled large scale terror attempts.

In this article:Fred Matiang’i, Terror Financiers