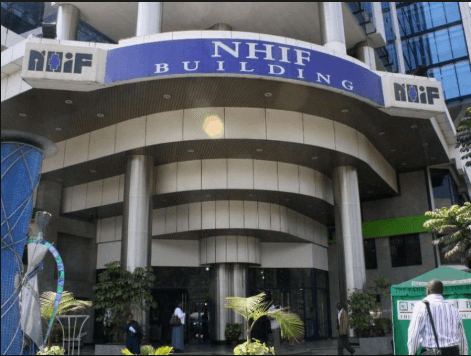 A call from State-House stopped the planned arrest and prosecution of the National Hospital Insurance fund CEO Mr. Geoffrey Mwangi, we have learnt.

Mr Mwangi, has been accused of masterminding multibillion scandals at the fund, with no action from the accountability institutions like ODPP, DCI and EACC.

According to reports, Mr. Mwangi dished out millions to Jubilee for the 2017 general elections hence why he has not been arrested or prosecuted over very open scandals that are in the public domain.

Attempts to arrest Mwangi over a Ksh. 400 Million saga were thwarted by a call from state-house that lamented that “Mwangi ni mtu wetu and he helped us with money during the elections” hence why EACC and other accountability institutions stopped following up the open case that exposed real looting, corruption and outright impunity.

The scandal, involved loss of more than Sh400 million paid out for a medical scheme for civil servants, police and prison officers. This is after the National Hospital Insurance Fund paid two bidders against an order by the Public Procurement Administrative Review Board. 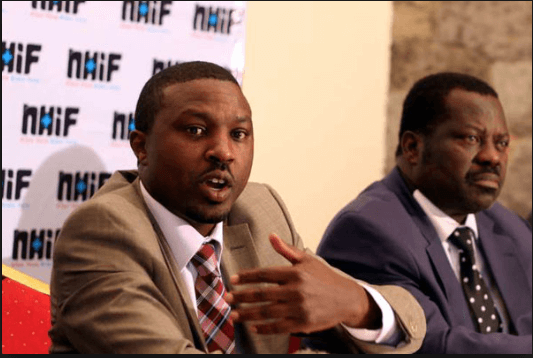 EACC, ODPP, EACC and other accountability institutions are yet to Arrest NHIF CEO Mr. Geoffrey Mwangi Despite Corruption

Britam Life Assurance Company (K) Ltd and Pioneer Assurance Company Ltd were awarded the tender, despite quoting high prices. Britam quoted Sh836,946,330 while Pioneer put its price at Sh852,284,830. The board had ruled that the award was irregular and ordered that NHIF contracts UAP Life Assurance Limited at its tender sum of Sh797,623,500. The tender was for the provision of the Group Life Cover and last expense for civil servants, National Police Service and Kenya Prisons Service for the 2017-2018.

In another scandal, It has now been revealed that NHIF that offers medical insurance to Civil servants and private members may have lost hundreds of millions in the biometric registration of members that kicked off in 2015.

NHIF had embarked on the use of fingerprints to identify all its members when seeking services in health facilities. During the launch of the exercise, NHIF CEO Geoffrey Mwangi said the fund had completed the biometric registration of civil servants and it was in the process of enrolling other members.

The use of biometric identification was expected to reduce cases of fraud in the medical cover scheme. A Snap check in government institutions including Kerugoya hospital, members of staff seem unaware of such product, but they confirmed that they only heard of the product a year ago, although nothing tangible has been done.

It is chilling and hard to comprehend why State-House would stop the arrest and prosecution of Geoffrey Mwangi, yet President Uhuru Kenyatta has listed Universal Healthcare is a key enabler of his ‘Big Four’ legacy plan.

Corruption in the health sector has reached cancerous levels and it is time the whip is cracked. National Hospital Insurance Fund CEO Mr. Geoffrey Mwangi must be arrested and prosecuted over these open scandals if the anti-corruption purge was not started only to Punish William Ruto’s thieves.