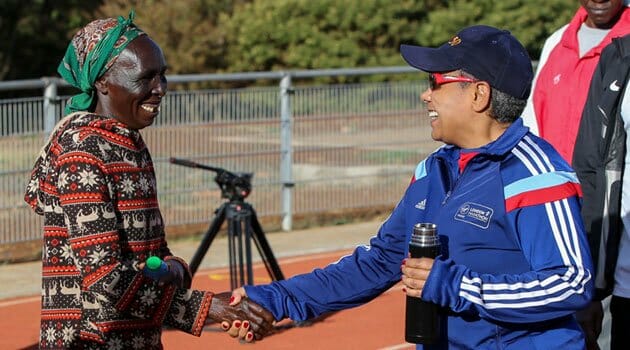 First Lady Margaret Kenyatta Monday morning intensified her training in the high altitudes areas of the North Rift where she covered over 10 km in the hilly and scenic Iten region.
After conquering the track which took her to some hilly sections bordering the Kerio valley, the First Lady arrived at the tartaned Lorna Kiplagat Stadium in Iten where she was jubilantly welcomed by, among others, 70 year old Veronica Ayabei who has been training every morning over the years.

Ms Ayabei who was following the same track as the First Lady had earlier given Mrs Margaret Kenyatta’s team members a run for their money when she out-spaced them before arriving at the stadium to welcome her.

Also on hand to welcome the First Lady was internationally acclaimed marathoner Lorna Kiplagat who is the proprietor of the stadium.

During the entire track, the First Lady rubbed shoulders with both international and local elite athletes whose pace was as swift as they are known for and the First Lady’s team could not keep pace with them.

The current training sessions are meant to be a build-up ahead of the March 8 First Lady’s Half marathon.

The forthcoming Half Marathon, like the previous two marathons she participated in, both in Nairobi and London last year, is aimed at creating awareness and mobilising resources for the Beyond Zero campaign. The First Lady successfully completed the two marathons.

The Beyond Zero initiative aims to reduce maternal and child mortality in Kenya which remains unacceptably high. The country loses more than 108,000 children annually before they celebrate their fifth birthdays while over 5500 women lose their lives while giving birth.

The campaign is driven by the principle that “no woman should die while giving life” which the First Lady has used as a mantra to mobilize awareness and resources globally.

Through the ongoing initiatives including the forthcoming First Lady’s Half Marathon, the First Lady hopes to raise an estimated Sh600 million to purchase 27 more mobile clinics for the remaining counties.