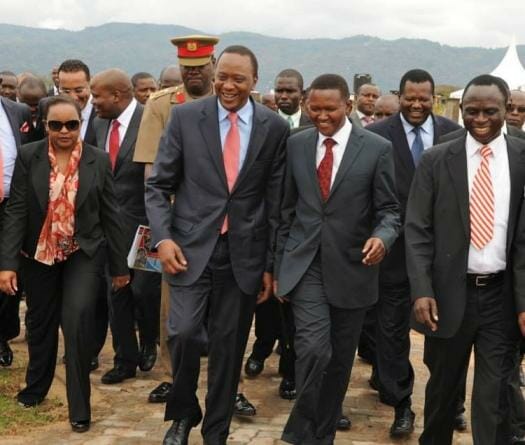 “Former Vice President Kalonzo Musyoka should know that time for the Kamba community to rule the country was ripe. If he feels he is not fit for the position, then he should back Dr Mutua for the top job because he has what it takes to wrestle with other contestants,” says a reported statement in Kenya media. On the other hand National Assembly Minority Leader, Francis Nyenze, is reported saying the coalition could have former Prime Minister Raila Odinga as its presidential candidate. Who will be on the presidential ballot 2017 for President or Deputy President?

President Uhuru Kenyatta (TNA Party) the Kikuyu factor
President Uhuru Kenyatta is expected to be on the ballot August 2017 when the first elections will be held based on the date set by constitution. This is about 42 months from now. The President will in all likelihood win during the first round unless he makes big blunders in the next 42 months. However, this time around he may not garner the 50% plus 1 needed. He will likely go to a run-off. This is what is today the political debate especially by the 2nd, 3rd, 4th and 5th largest tribes, (Luyha, Kalenjin Luo and Kamba respectively). The leaders from these tribes who what to see one from their community ascend to the Presidency are discussing this and there is also the Coast people forming a single party.

Raila Odinga (ODM Party) and Luo factor
During the 2013 Elections Raila Odinga prepared well for the elections. Everything pointed to a victory. Raila was defeated even after working hard to bring the three of the five largest tribes (Luo, Luhya and Kamba) all with a population of 10% or over to vote for him. 2017 Raila will be 72 years and the generation that influences the election of Presidents, youth 18 years to 25 years, many voting for the first time may not accept him purely based on age. Whereas in the past Jomo Kenyatta ascended to office at 74 years and Mwai Kibaki was 71 years, today digital era and with the consideration Kenya Constitution capped the age of Supreme Court justices at 70th birthday will likely work against Raila Candidature.

Deputy President William Ruto and Governor Isaac Ruto (URP Party) the Kalenjin factor
One or both of the Ruto’s will likely be on the ballot 2017 and President or Deputy President Candidate. The Kalenjin will not likely win the Presidency 2017 but could still be in the Executive leadership just like they currently are. Imagine a Uhuru Kenyatta – William Ruto ticket against two Governors ticket of Alfred Mutua-Isaac Ruto ticket.

Musalia Mudavadi (UDF) and Moses Wentagula (FORD-Kenya) and Luyha factor
The Luyha constitute the largest tribe in Kenya and have never come close to making a good Presidential run. Signs that this is changing are today evident. Many of the Luyha leaders who took the community to ODM are not interested in ODM party. Will the Luyha field one candidate? Will they opt for the Deputy president post. I wouldn’t be surprised if the running mate of Uhuru Kenyatta became Mudavadi 2017 based on how the Ruto verses Ruto politics unfold. Wentagula could easily become Odinga running mate with an eye of 2022.

Mombasa Governor Ali Hassan Joho and the Coastal Factor
Uniting the Coastal people is one of the hardest things because of diversity. However, a message could emerge that could see a majority of people unite behind the message. The person who has shown Presidential aspirations is Mombasa Governor Ali Joho when he stated the ODM presidential nomination should be competitve. He is best suited to run for Deputy President 2017 with an eye to the future.